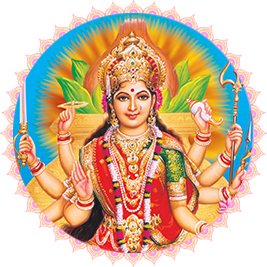 Navaratri is one of the very significant festivals celebrated throughout India. ‘Nava’ or ‘Navam’ means number 9 and ‘Ratri’ means night. Navaratri thus denotes the 9 sacred nights dedicated to the worship of the Mother Goddess Shakti. Though Navaratri is observed in all the seasons (Vasant or Spring Navaratri during March – April, and Ashada Navaratri during June-July), the autumn Navaratri, which falls in the bright fortnight of the month of Ashwin or Purattasi (Sep-Oct) is very widely celebrated.

Navaratri denotes the victory of good over evil and the celebration of the divine feminine power that nurtures and protects the entire universe from negativities. During Navaratri, Goddess Shakti is revered both in her 3 supreme forms – Lakshmi, Durga, and Saraswati as well as in her 9 unique forms – Shailaputri(daughter of the mountains), Brahmacharini(female celibate), Chandraghanta(one who has a half moon shaped like a bell), Kushmanda(ku means ‘little’, ushma means ‘warmth’ or ‘energy’ and anda means ‘cosmic egg’), Skandamata(mother of Skanda), Katyayani(daughter of katyayana), Kalaratri(terrible night), Mahagauri(extremely white), and Siddhidatri(giver of supernatural ability). Propitiating the mother Goddess during these nine special nights can bestow you with power, prosperity, abundance, and knowledge. 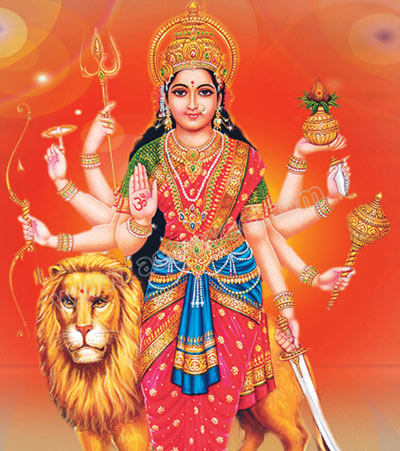 Navaratri represents the battle of good against evil and its ultimate triumph. Though it is observed differently in various parts of the country, there are widely believed mythologies behind all such observances. The most prominent of these legends sing the glory of Goddess Durga and her exploits. This divine female force took on the might of Mahishasura, the powerful buffalo-headed demon and waged a fierce battle with him during these nine nights. The good represented by the Goddess triumphed in the end as she ultimately destroyed the demon on the tenth day, thus saving the people from his atrocities. Navaratri marks the 9 days of her heroic battle with Mahishasura, while the tenth day of her resounding victory, is observed as Vijayadasami, which means the victorious tenth day. As these celebrations here revolve entirely around Goddess Durga, the festival itself is called as Durga Navaratri.

Another popular legend associates Navaratri with the great epic Ramayana. It is during the Navaratri that Lord Rama waged war against the demon Ravana. After fighting him and his forces on these 9 days, Rama killed Ravana and achieved a decisive victory on the tenth day, which is celebrated as Vijayadasami. The same legend extends the theory further and terms the festival of Diwali that follows, as the day of Rama’s victorious return to his capital of Ayodhya.

Navaratri is celebrated with unique and exclusive ceremonies for the Mother Goddess all over India. The eastern part of the country, which includes West Bengal, celebrates Navaratri as the main festival when an elaborate Navaratri Pooja is offered to Goddess durga, and the entire region rejoices in the carnival of joyous festivities. Huge images of Durga riding a lion along with those of Goddess Lakshmi and Saraswati are installed in makeshift tents in many public places. While daily worship is offered to the deities on these 9 days, cultural programs and social get-togethers are also held along with them. On the tenth Vijayadasami day, the images are taken in grand processions and immersed in water bodies.

The northern states of India celebrate Navaratri as Ramlila when episodes from the Ramayana are enacted every day. On the victorious day of Vijayadasami, huge images of Ravana, his brother Kumbhakarna, and son Meghanad are set on fire, symbolizing the annihilation of evil.

In western India, Navaratri is the time for great revelry, when people resort to traditional dancing, known as Dandiya Raas ( a playful dance with sticks), Garba (dance similar to Dandiya Raas), etc., in groups.

In South India, Navaratri is the time for Devi worship, when all the supreme Goddesses, Saraswati, Lakshmi, and Parvati are worshipped. A special, beautiful arrangement of dolls called 'Golu' is installed in many houses. The ninth day of the Navaratri is Saraswati Pooja, when special prayers are offered to the Goddess, and also as Ayudha Pooja when devices and instruments used in a person’s vocation are worshipped. Vijayadasami is held as a very sacred day when children are initiated into learning, and new ventures are begun.

Worshipping the Supreme Goddess during her 9 auspicious nights of Navaratri can bestow you with the following benefits:

Lakshmi Fire Lab- This Fire Lab helps you invoke blessings for material wealth and abundance. Goddess Lakshmi is the consort of Lord Vishnu, who also bestows his devotees...