Devi Siddhidatri is the ninth form of Navdurga and is worshipped on the ninth or final day of Navratri Pooja. In Sanskrit ‘Siddhi’ means perfection and the divine Goddess is revered to seek all types of Siddhi. The grace of Devi Siddhidatri can put an end to greediness and help to control and satisfy the desires of her devotees. 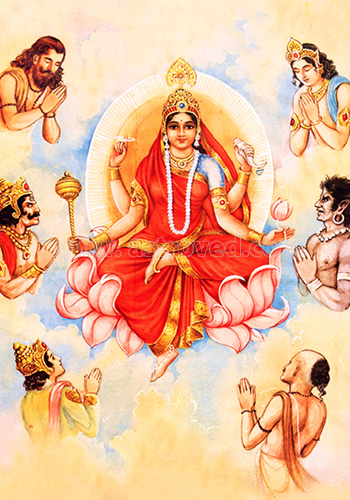 Devi Siddhidatri is represented draped in a red saree with a golden complexion. She is depicted with four arms and sitting on a pink lotus flower. She holds a mace in her upper right hand and a chakra (discus) in her lower hand. She holds a lotus and a white conch in her upper and lower left hands respectively. Her procession is lion.

According to Devi Purana, Lord Shiva attained all the Siddhis (perfections) by worshipping Goddess Shakti. Because of her blessings, Shiva’s half body became that of the supreme mother which bagged him the name ‘Ardhanareeswar’. It is also believed that Dev, Gandharva, Kinnar, Yaksh, Manav and Danav propitiated Devi Siddhidatri to accomplish their desires.

Upon worshipping Devi Siddhidatri with complete faith and devotion, you can acquire all of the above mentioned Siddhis and nothing remains unattainable with her divine blessings. She dispels darkness and grants knowledge for her ardent worshippers.

Offering your earnest prayers to Devi Siddhidatri by chanting this mantra on the ninth day of Navratri Pooja can spiritually move you to the divine abode of the Mother Goddess and receive her eternal blessings.

Butter and Khoi (sweet made with popped rice) are unique offerings made to Devi Siddhidatri on the final day of Navratri Pooja to receive her unconditional love and fulfillment of your desires.