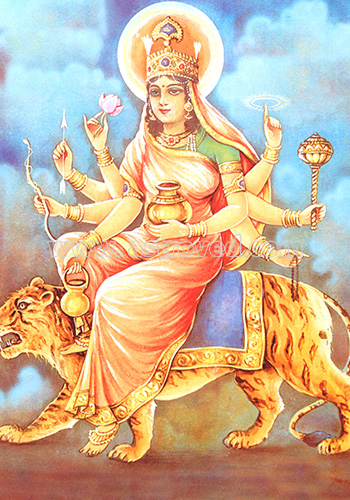 Goddess Kushmanda is also called as Ashta-bhujadhari and depicted with eight arms. She is seated on a lion, glowing with radiance and holds Kamandala (sacred water pot), bow, arrow, lotus, a jar of nectar, discus and mace, respectively. In her eighth hand, she carries a rosary blessing you with eight Siddhis (perfection) and nine Nidhis (treasure).

According to legends, the universe was null and void in the beginning with no survival. Devi Kushmanda, the primordial Shakti created the entire universe and spread her luminance everywhere. It is believed that the God (Shiva, Vishnu and Brahma) and Goddess Trinity (Lakshmi, Saraswati and Parvati) were created by Devi Kushmanda. She is also the controller of the solar system.

Adoring Devi Kushmanda on the fourth day of Navaratri, the Adi Shakti can purify your mind, body and soul. She can award relief from all physical and mental ailments and destroy all hurdles. The supreme mother can put an end to your sorrows and bestow you with longevity, strength, wealth and fame.

Worshipping Devi Kushmanda on the fourth day of Navaratri by offering special Poojas and chanting this mantra can dispel all evil forces and enhance positivity around you.

Kushmanda in Sanskrit means pumpkin, which the goddess likes as sacrificial offer. You can also offer traditional sugar to Devi Kushmanda to fulfill your material desires.