Ask Sai Baba with Faith and Get your Answer Right Now

Think of your Question and Click on the Image below:

Shirdi Sai Baba is a revered and spiritual saint worshipped across India and has devotees the world over. Hindu and Sufi saints look up to Shirdi Sai Baba. There are still debates over his origin. According to some sources, his parents were Brahmins from the town of Pathri in the Nizam’s state. God appeared in their dream one day and said the child was special and a form of God, and that the parents should hand him over to a fakir. It was for the child’s benefit.

The parents were anxious about giving away the child. A fakir visited them the next day, and the parents gave the child away with a heavy heart. They did not know what became of him.

Sai Baba grew up in the home of the fakir, whose wife was delighted to bring up the child. The child was brought up in Islamic ways. The fakir fell ill a few years later. Knowing his death would occur soon, he entrusted the child to the care of a Brahmin, Guru Venkusa residing in Selu, who realized the child had some supernatural powers. He raised the boy. 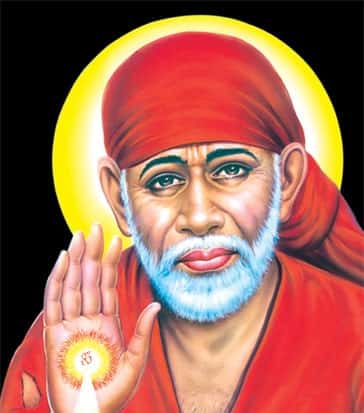 Sai Baba left his home at the age of 16 after taking permission from his Guru. He entered the outskirts of Shirdi village in Ahmednagar district, Maharashtra. He sat under a neem tree in Yoga Mudra, oblivious to the heat, cold, and other weather conditions. Villagers wondered about his identity and gave him a hostile reception. He left the village and went to an unknown destination. Sai Baba later returned to Shirdi in 1858 and started residing in a dilapidated mosque. He begged for survival and later began performing miracles.

Here are some of the miracles performed by Sai Baba. Devotees prayed with faith and devotion, and Shirdi Sai Baba answered their prayers.

Once, a Sai Baba devotee, Joshi Devgankar’s daughter, was dying of acute tuberculosis. No doctor could cure her. The child was taken to Sai Baba. They followed his advice, but the child died a week later. At the death ceremony, Sai Baba appeared, seemingly angry, and he spoke in an unknown language. The child opened her eyes and narrated how Sai Baba saved her. The people realized Sai Baba’s powers.

An elderly man Nanasaheb lived 100 miles away from Shirdi. His daughter Meenatai was staying with him for the delivery of her child. The daughter’s condition became critical. Nanasaheb prayed to Sai Baba. Meanwhile, the saint sent a devotee Ramkripa to Jamner with Udi (holy ash) and a Mantra. Ramkripa having no money, walked halfway when Sai Baba appeared as a driver with a horse cart and took him to Nanasaheb’s house in Jamner. Nanasaheb chanted the Mantra and applied Udi to his daughter Meenatai. The pain stopped, and she delivered the baby. Later, the two devotees realized it was Sai Baba himself who had appeared with the horse-cart for Ramkripa, as Nanasaheb had not sent him any transport.

One can have the solution to his problems by asking Sai Baba; use Sai prashnavali and he will resolve all your doubts.

A priest named Kakaji served in the Saptashrungi temple in Vani, a village in Maharashtra. Goddess Bhagawati was the main deity. Kakaji had several family problems and prayed to her for peace of mind. She came in his dream and asked him to worship Sai Baba. Kakaji thought she had referred to Shiva and visited a Shiva temple, but he was still restless. Later, the Goddess directed him to the Sai Baba temple in Shirdi. Kakaji did not know how to get there.

Meanwhile, Shirdi Sai Baba directed another devotee Shaamaa to pray at his family deity’s temple at Saptashrungi for resolving his family problems, where he met Kakaji and spoke about Sai Baba’s miracles. Kakaji accompanied Shaamaa to Shirdi and saw Sai Baba. They did not exchange any words. But Kakaji went back home with peace of mind. He became a devotee of Sai Baba.

Once Shirdi Sai Baba gave Moksha (salvation) to a tiger. There was a famous circus company in Mumbai that ran into heavy losses over time. All the animals were assigned to a zoo, barring an aged tiger, suffering in tremendous pain. Someone told the circus owner about Sai Baba. The owner took the tiger in an iron cage to the mosque at Shirdi, where Sai Baba was residing. Sai Baba came out and asked the circus owner to open the enclosure. The man was afraid, but Sai Baba asked him to have belief and directed him again to do so. The cage was opened. The tiger slowly came out to Sai Baba, lay down near his feet, and died. Sai Baba said the tiger had attained Moksha. Ask Sai Baba using Sai prashnavali and Sai will answer all your questions leaving you with a relieved heart.

Shirdi Sai Baba was extremely fond of lights and kept the lamps burning in the mosque and temple throughout the day and night. He used to borrow oil from the shopkeepers in the vicinity. The shopkeepers provided the oil free of cost, and there came a time when they met together and decided to stop the practice. Unperturbed, Sai Baba prepared the lamps with cotton wicks and filled his Tumrel (tinpot), which had a few drops of oil left, with water. He sipped from this mixture and let it fall back into the Tumrel. He filled the lamps in this manner and lit them. The lamps burned throughout the night and left the shopkeepers amazed and in shock. They realized their mistake and apologized to Shirdi Sai Baba. He forgave them. Sai prashnavali is a beneficial way to have answers to your questions. Ask Saibaba about whatever you have in mind and you will get the answer through the prashnavali.

Shirdi Sai Baba helps the poor and deprived and anyone in distress. His compassion knows no bounds. He answers any questions you may have. Several people have received answers from this revered saint in different forms. The image form has been used here. Keep your mind and heart clean, pray to Sai Baba, and ask questions. He has helped thousands of people through all their problems and resolved it for them.

Imagine yourself at Sai Baba’s feet at his temple, and you will have peace. Then share all your problems with him. When you ask Saibaba, keep your heart clean and pure, with faith. He will answer all your questions.

Ask Sai Baba. He will reply and resolve your problems.

Shirdi Sai Baba Answers for Your Sorrow, Fear, Health, Profession, and Other Questions

Sai Baba will answer your question. Close your eyes and pray sincerely to Sai Baba for a solution to your problems.

Think of the question you have in mind and click on the image of Shirdi Sai Baba. The answer will be the solution to your problem.

The Sai Baba Prashnavali has been formed for anyone who has faith in him and will have his blessings. Keep your faith and your mind and heart clear. Think of the question and click on the image. Sai Baba will answer your question.

Shirdi Sai Baba protects his devotees always. Sai prashnavali guides people from darkness to light. He teaches us to keep the Shraddha (faith) and Saburi (patience) as we go through life in good times and bad. Devotion and surrender to Shirdi Sai Baba lead the way to him.