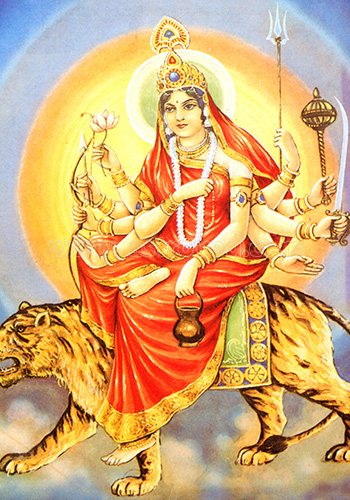 Devi Chandraghanta is propitiated on the third day of Navratri and is believed to be the married form of Goddess Parvati. ‘Chandra’ means Moon and ‘Ghanta’ means bell. Once she married Lord Shiva, she adorned her forehead with half Moon, which gave her the name – Chandraghanta. In this form, the divine Goddess is depicted with all her weapons ready to battle against evil forces.

Devi Chandraghanta is depicted riding a tigress and glows like a golden angel, wearing a half-moon and a bell on her forehead. She is seen with ten hands each holding a different weapon. The Goddess holds Trishul, Gada, Sword and Kamandala (sacred water pot) in her four left hands and keeps her fifth left hand in Varada Mudra. Devi carries lotus flower, Arrow, Dhanush and Japa Mala in her four right hands and keeps the fifth right hand in Abhaya Mudra.

According to legend, on the day of marriage of Lord Shiva and Goddess Parvati, the mother Goddess took the form of Chandraghanta. While, Lord Shiva arrived with an army of gods, sages, ghosts, goblins etc. Parvati’s parents fainted in terror upon seeing the threatening appearance of the Lord with a huge body, long hair, skulls and serpent around his neck and tiger skin as clothes. Chandraghanta then requested him to take his charming form, when Lord Shiva appeared as a prince adorned with jewelry and married the beautiful Goddess.

The divine Mother Chandraghanta is adorned with a divine Moon-bell on her forehead, the sound of which is believed to expel all the evil forces away from her ardent devotees. The Goddess is symbolized with a third eye at the center of the forehead like her consort, Lord Shiva.

Goddess Chandraghanta is the personification of supreme knowledge and bliss who can eradicate all your sins, miseries and negative energies.

Another aspect of Chandraghanta is her gentle and graceful form for the welfare and spiritual enlightenment of her devotees.

Mother Chandraghanta loves to be offered kheer (pudding) or milk to please her and receive her eternal blessings and a sin-free life.