Katyayani is one among the Navadurgas, the nine forms of the Goddess Durga. Katyayani is a fierce manifestation of Shakti, the divine female power. The term Durga means ‘the invincible’, and Katyayani, the warrior Goddess, remains as one. Regarded as the sixth of Durga’s nine forms, she is worshipped on the sixth day of the Navratri festival.

What is the legend associated with Goddess Katyayani?

Vamana Purana gives a detailed account of Katyayani’s incarnation and heroic feats. Once a number of demons performed penance for pleasing the Gods and obtaining boons. Mahishasura was chief among them. He had the face of a buffalo and already possessed tremendous strength. He did severe penance towards Lord Brahma, and got from him various boons, which made him almost unconquerable. The most important of the boons that he obtained assured him that, if at all he was killed, that can only be by a woman. Thus fully armed with many blessings and well protected by boons, he went on the rampage and played havoc on heaven and earth, committing unspeakable atrocities against the Devas and human beings. The ultimate Gods, Brahma, Vishnu and Shiva decided to put an end to his wrongdoings, and together emitted a massive flame, from which emerged Devi Katyayani, with the brilliance of innumerable Suns. With three eyes, eighteen arms and a flowing black hair, she was resplendent. While the heavenly beings bowed to her, the Gods armed her fully with powerful weapons like trident, discus, conch, dart, sword and shield, bow and arrows, thunderbolt, mace and battle axe, and also with a rosary and water pot. The Goddess then proceeded straight on her lion mount, along with her army, to take on Mahishasura.

However bowled over by her dazzling beauty, the demon, instead of engaging her in a battle, simply asked for her hand. But the Goddess smiled and told him to win over her first. Then they fought a terrible war, at the end of which, the Goddess defeated the demon comprehensively and cut off his head with her sword. The grateful world celebrated Devi Katyayani’s great victory and hailed this slayer of Mahishasura, as Mahishasuramardhini.

As per another story, Katyayani accompanied Goddess MahaLakshmi to the present day Kolhapur town, to fight demons like Kolhasur and Rakthabeej. The latter had the power by which, every drop of his blood that spilled on earth gave rise to a new demon, and it was becoming a difficult battle for the divine forces. Katyayani began swallowing Rakthabeej’s blood spills completely, and then, the demons could be destroyed. This exploit of the Goddess is commemorated in a temple for Katyayani near Kolhapur.

How is Goddess Katyayani worshipped? 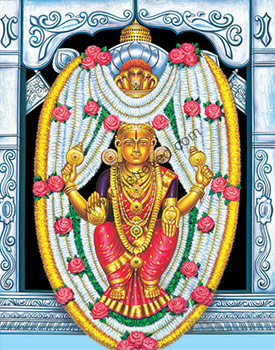 The most important temple for Maa Katyayani is located in Bakor village in the Mahisagar district of Gujarat. This is a magnificent temple complex built mainly of marbles, and people irrespective of their castes and religious beliefs come here for worshipping the mother Goddess.

There is also a special worship or Maa Katyayani Pooja for the Goddess, which Bhagavatha Purana speaks highly about. Known as Katyayani Vrata, this is a unique worship which was undertaken by the maiden of Braj Bhoomi, the land of Krishna in UP, during the Hindu winter month of Margashirsha (Margazhi in Tamil, equivalent to Mid-December to Mid-January), for attaining Krishna himself as their husband. Observing strict austerities including full or partial fasting daily, throughout the month, they used to worship the earthen idols of the Katyayani Devi. Many young girls still observe this worship for getting good husbands.

The virgin Goddess Kanyakumari enshrined at the southern-most tip of our country, is regarded as an incarnation of Katyayani. In the present days too, young girls observe austerities and offer worship to this Goddess during the Margazhi month praying for good rains, prosperity and welfare, and conclude it on the day of Makar Sankranti-Pongal festival.

Durga Pooja helps invite Goddess Shakti into your life to get rid of hitches, promote longevity & lead a happy and contented life.

This Yantra radiates the unflinching energy of Durga to overcome your struggles & enemies and bring you in the limelight.