The system of building construction that has been followed in our land from ancient times is called Vastu Shastra. It is believed that adhering to its guidelines can bring all-round benefits in the lives of the people and hence its principles are taken with a lot of regard and respect.

Here, let us learn about what Vastu has to say about some select parts of a house. 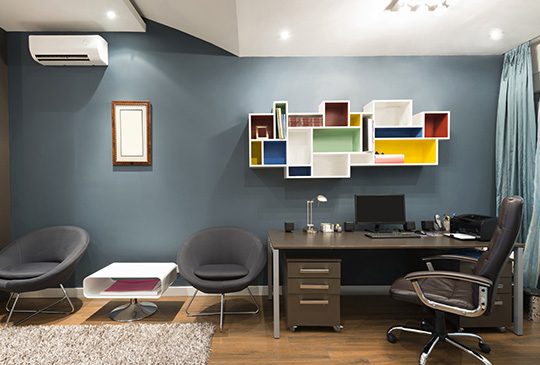 Many houses possess in them, study rooms that are meant principally for children who are in the learning process. This is thus a place of knowledge and remains naturally as the dwelling location of Saraswati, the Goddess of learning. As West is regarded the direction of this Goddess, it is ideal to have the study room in the Western portion of the house.

Mercury, the planet of intellect is believed to rule the Northern direction; Jupiter, the planet of knowledge and wisdom rules the Northeast; and the all-powerful Sun controls the direction of his rise, the East. Hence, study rooms can be constructed in these directions of North, Northeast or East, too.

It is beneficial to have its door in the West or Northeast, whereas the windows can be in the East, West or North. Decorating the Eastern wall with an image of Goddess Saraswati and installing the Saraswati Yantra in the auspicious Ishan, the Northeast can earn for the students, tremendous divine blessings.

Books and study materials should all be stored in the North or Eastern parts of the room while placing a pyramid in the study table can aid to single-minded focus. Students should also study facing East for maximum positive effect. The walls and the curtain can sport light colors that are considered auspicious, such as light green, light blue, etc.

For the sake of abundance, storeroom, the place where food grains are stored should remain in the Northwest direction. Its doors and windows can be in East or North. People should see to it that the containers do not become empty of any food grains, and this can contribute to auspiciousness and prosperity.

There are also such places of storage meant for non-edible items like spare parts, tools, unused furniture, machinery, etc. and the right place for this safekeeping is the Southwest portion or corner. This space can be in the open within the plot of land or in the premises itself.

Banks have strong rooms where they store cash, precious items and customers’ lockers, which usually contain jewelry and other precious items. Such strong rooms are built in some big houses too. Kubera is known variously as the Lord of wealth or the treasurer of Gods, hence the direction ruled by him is regarded as most suitable for a strong room. This is North, and that is the part of the house, where a strong room should ideally be. Its door can be in the East or North. When there is no strong room, cash, ornaments, etc. can be stored in East or Northeast too. In such a scenario, the cupboard can also be in any place, but should only be touching the wall in the South and have its door towards the North.

South is the direction of Yama, the God of death and hence that is not particularly recommended for the strong room. The Southeast or Northwest directions too are not considered favorable.

The garage for parking of vehicles can be made in the Northwest direction, and if not, it can also be in the Southeast. Its roof should be at a level lower than that of the main house, whereas it should not also be touching the compound wall or the main building. The garage can be painted with light colors including yellow or white, whereas it is better to avoid black or dark ones. It will be beneficial if vehicles are parked facing Northeast and while being driven out, they should take a right turn first.

This can be open or enclosed, and should ideally be to the Eastern or Northern side of the house. Its roof should also be sloping towards East or North, while its height should be less than that of the main building. Closed Verandahs can have windows to the East or North, while arrangements for seating can be made to the West or South. Having greenery around can add to its appeal.

Vastu as such does not approve of a place of residence has a basement or an underground cellar. Its main drawback is that it remains entirely cut off from sunlight or heat. However, if at all this has to be constructed in a house, it should only be in the Northeast direction, provided it is slightly projected above the ground level, so that at least some sunlight and air can enter the enclosure.

The one activity, which can very well be carried out here, is worship, and thus a basement can be used as a Pooja room with beneficial effects. While this place can also be utilized as a living room, a study or a storeroom, it should never be used for sleeping.