Importance of directions in Vastu

The well-respected, ancient architectural system of our land is known as Vastu Shastra. This is held as a sacred science, and it is believed that putting it into practice while constructing houses and buildings can do a lot of good to the people.

Importance of Directions in Vastu 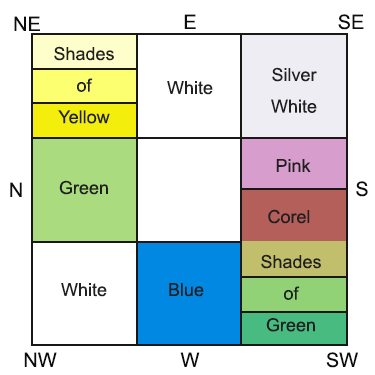 Directions hold prime significance in the realm of Vastu. It can even be said that this entire system is direction-based and that the principles, the do’s, and don’ts are all direction-specific.

Directions are not mere points displayed in a compass but are held as energy centers by the Vastu Shastra. A deity rules each of these directions and influenced by a planetary Lord. These aspects form the basis on which the principles of architecture have been designed and practiced.

There are four principal directions, and these are the North, South, East, and West. These are known as cardinal directions. There are also four sub-directions known as ordinal directions. These are found in between the main directions and are said to have the qualities of both the directions, each of them falls between. These are the Southeast, Southwest, Northwest, and the Northeast. All these eight directions are believed to be impacted by specific divinities, planets, and energies, and have their unique characteristics accordingly. Vastu accords immense significance to all these eight directions and has laid down the patterns of construction in line with the essence of these aspects.

Now, let us get to know something about every one of these Vastu-significant directions.

East is the direction that brightens up first on a day, and nature conscious Vastu too places this as the first among the directions. The Sun rises in the East, and that remains as the planetary Lord of this direction, while Indra, the king of the heavens is the deity. East represents essential features like intellect, health, wealth and joy, and hence keeping this direction faultless in the house can provide the occupants with these blessings in good measure. Any defects there can affect the head of the family.

Varuna is the deity of West, and the much-feared Saturn is the planetary Lord. According to Vastu, this direction denotes prosperity, success, and fame. The western direction in a house should be fault-free, which could otherwise affect mental health.

Kubera and Mercury remain the ruling deity and planetary god of the northern direction, respectively. This stands for learning, meditation, and happiness. A vacant North can ensure comforts and achievements, while cluttering can cause diseases.

South has Yama as its deity and the fiery Mars as its planetary Lord. This direction indicates courage and success. It is advisable to have this direction at a higher level and also have heavy things there for excellent benefits. Presence of water or mirror there can lead to ill health.

Southeast has Agni (fire) as the deity and Venus as the planetary Lord. Vastu considers this as the direction of health. A well-kept Southeast of a house can ensure robust health for the occupants, which otherwise can contribute to ailments.

Nairitti is the deity for Southwest while its ruling deity is the shadow planet Rahu. Vastu holds this as the devil’s direction. This should ideally remain occupied, and that can give people the fighting spirit. However, a poor Southwest can give rise to problems, accidents, and injuries.

This direction has Vayu as its deity and the Moon as the planetary Lord. This represents relatives and friends. A well-maintained Northwest can provide benefits through relationships, while a defective one can result in enmity and litigations.

For the Northeast, Lord Shiva is the deity and Jupiter, the planetary god. This direction represents wisdom and spiritual orientation. A faultless Northeast would do overall good for the occupants, while a defective one may create tensions and dissonance among people.