Vastu for the Kitchen and Dining

The ancient system of architecture that has remained popular in our land even from the time of the Vedas is called Vastu Shastra. It is believed that the principles enunciated therein, when adhered to during building constructions, can bring in great auspiciousness in the lives of the residents, and hence this science has been accorded the status of sacred scripture.

Continuing with the Vastu principles in respect of a dwelling place, let us get to know here, something about the cooking and eating portions of a house.

Vastu for the Kitchen

Vastu Shastra regards the Southeast corner as the best place to have the all-important place of the kitchen in a house.

Southeast is known as Agneya, the direction that represents fire and hence is held as most suitable for using fire as a medium for cooking. Further, Mars, the fiery planet rules over the kitchen; not only the fire part of it but also the items used therein like the oven, fuel, knife, etc. Mars is malefic by nature, and hence it is essential that the kitchen is located in an auspicious place that can keep away calamities like injuries and food poisoning.

If Southeast-kitchen is not possible for any reason, Vastu suggests Northwest as an alternative, but still insists on having the exact place of cooking only in the Southeast corner of that kitchen.

Thought East is also suggested as a possible place for kitchen, no direction other than the Southeast or Northwest is advisable for positioning the kitchen. It is cautioned that any violation can lead to a variety of problems like a financial loss, wasteful expenditure, food-shortage, family disharmony, etc. People also should make it a point not to use the kitchen for sleeping, as this may result in a Mars-Venus combination and conflict, and prove highly inauspicious. This room should also not be constructed near the Pooja room or toilet.

While it is ideal for the woman of the family to face East while cooking, the platform or the stove as such, should on no account be at the middle of the kitchen.

The kitchen is also the place where water is used, and fire and water are not the best of friends; and hence, they should be kept as far away from each other as possible. Vastu, therefore, suggests Northeast corner as the right place for water tap, sink, etc. The kitchen can have its doors in any of the directions – East, West or North, while windows can be in East or West. 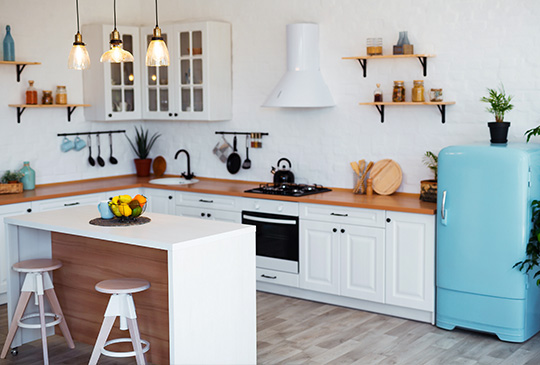 Southeast or Northwest is the preferred direction for a refrigerator within a kitchen, while West or Northwest, for the dining table.

Whether one can adhere to the Vastu guidelines in respect of the construction of a kitchen in a house or not, the cardinal principle remains that people should offer the first food item cooked there to Gods with devotion and then accept it as Prasad. This will ensure the all-round wellbeing of the family.

Spacious homes, especially in the present times, do have an exclusive space for eating. Vastu has its guidelines for such a dining room too and suggests West, North or East as the right directions for this. This also depends on the position of the kitchen in a house; a Southeast kitchen can have the dining in its South or Eastern direction, while a Northwest kitchen can have it in the North or West. While the family members facing East, West or Northern directions while eating may prove beneficial for them, South remains disadvantageous and hence Vastu-forbidden for this purpose.

The dining hall can have its door facing East or West, while the washbasin should be in the North or East, and the refrigerator in the Southeast. The dining table should preferably be in regular shapes like a square or rectangle, while round ones are better avoided.