Vastu Purusha the god of Vastu

Vastu Shastra is the traditional system of architecture, which our ancients were following in their construction procedures. This is believed to be a divinely ordained system and has a deity as its God. He is called Vastu Devata or Vastu Purusha. 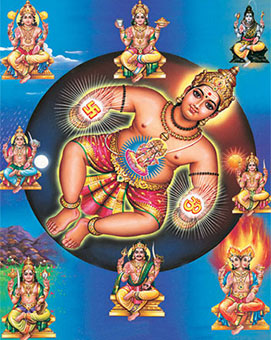 The body of Vastu Purusha remains the place of residence of many Gods, and mythology gives an account of this unusual phenomenon.

Vastu Purusha emerged out of the sweat of Lord Shiva in a large human form. However, when he started causing serious trouble to the Devas, the heavenly beings were forced to come together, bring him under control, and press him down forcefully with his face to the ground. However, realizing that this entity was created only for the benefit of the world, they calmed him down, bestowed him with blessings and made his body itself their place of stay. Thus, Vastu Purusha is not merely a single divinity, but a unified form of many Gods spread all over his body.

As many as 45 Gods are believed to reside in Vastu Purusha’s physical frame, with Lord Brahma, the creator occupying the all-important central portion of the body. This location is known as the Brahmastan and is regarded as perhaps the most significant aspect of the Vastu principles. Of the total number of Gods, 13 are residing in the middle parts of the body and 32, at the corners. The different parts of Vastu Purusha’s body are thus said to represent the different Gods they are housing.

It is Shiva who occupies the head portion and Brahma, the place behind the navel. As far as other deities are concerned, Parjanya and Diti stay in both the ears; Apadeva, above the throat; Ayarma and Prithwidhar in the breasts; Jaya and Aditi in shoulders; Apavatsa above the heart; Savitra and Savita in the upper right arms; Rudra and Dudradas in the lower right arms; Mrityu and Mitra in the thighs; Indra and Jaya in the private parts; Agni and Roga, above the knees; Nandi, Sugreeva, Asur, Kshona, Pusha, Varun, Papa and Yakshma in the blood vessels of the legs, and Pitra in both the heels.

All these 45 deities have their specific mantras dedicated to them too.