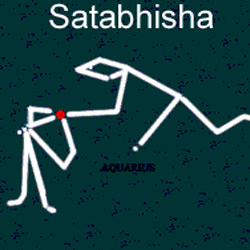 A group of faint stars, completely within the sign of Aquarius, form the nakshatra Shatabhisha. When gazing at this nakshatra in the sky, Sadalachbia (Gamma Aquarii) is the brightest star of the group. Shatabhisha is known as "100 physicians" and is connected to medicine and healing abilities. People born under this star are independent and intrigued with puzzles, research and getting to the bottom of things. The symbol of Shatabhisha is an empty circle, which indicates the ability to explore mysteries and philosophies of the unknown. Shatabhisha is a secretive star with a focus on the hidden powers of life. This may lead to a reclusive life and those born under this star must be cautious of depression and seclusion. Overall, Shatabhisha bestows a truthful, perceptive and ambitious nature.

Each Nakshatra is divided into four quarters called padas that contain more specific characteristics of a person born during the pada of Shatabhisha:

The temple associated with Shatabhisha star is located at Thiruppuhaloor in the Thanjavur District of Tamil Nadu, India. This temple called the Gracious Karundhaarkuzhai Samedha Sri Agneeswarar Temple has divine energy capable of revealing the past, present and future.

Those people born under Shatabhisha star should anoint Lord Shiva, named Sri Agnesswarar, with sesame (gingili) oil and sandal paste on Shatabhisha star day, especially if it falls on Saturday. It is also auspicious to perform abhishehkam, archana and a fire ritual. Conducting these rituals will bring healing for illnesses. Worshipping at this temple also provides assistance to overcome problems cause by the influence of Saturn.

It is favorable to light sesame (gingili) oil lamps in the shape of a crescent and offer food made of rice and milk. It is also beneficial to partake in charity work or philanthropy. Those people born under different stars may also perform abhishekham and archana and ask for the Grace of Lord Shiva. It is especially powerful on Shatabhisha day during the month of Chittirai (April 15- May 14). Visiting this temple brings blessings of good health and longevity.

It is believed that the first Sandal tree originated on Shatabhisha star. It is considered an auspicious service to grind the sandalwood with one’s own hands. A person can anoint the deity with this sandal paste and ask for peace of mind and spiritual knowledge. If sandal paste is given as prasadham and applied to the forehead it will reduce anxiety and provide divine energies.

Shatabhisha natives, your incense is made with the herb Kadambha as prescribed by the Vedas.