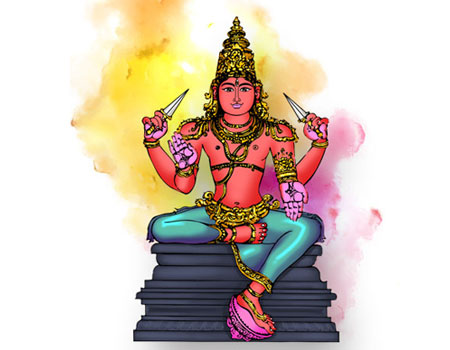 Epsilon, Delta, Mu, Rho, Sigma and Zeta-Hydrae. In astrology, Ashlesha is in the zodiac sign of Cancer. The symbol for this star is a coiled serpent and is ruled by the Nagas, serpent deities of wisdom. The snake signifies the Kundalini energy, which is the true essence of Ashlesha. Poison and deception, as well as the power of intuition, insight and sexuality are all characteristics exemplified by Ashlesha. This star represents primordial nature and is connected to past lives and genetic heritage. Ashlesha is a challenging energy to grasp as it mysterious and suspicious, yet people born under this star are often astute observers. They sense danger quickly and are protective toward family and friends. Those born under Ashlesha have an affinity for food and will not tolerate hunger, of any kind. This is a star of transformation and healing energy with an esoteric nature.

The Nagas, Serpent Deities of Wisdom

Moon, as the ruler of Cancer.

The sacred energy vortex associated with Aslesha star is the shrine of Thirundhudevankudi Sri Karkadeswarar located in Thirudhudevankudi near Kumbakonam in Tamil Nadu, India. This temple is often referred to as NandanKoil by the local people. Those born under Aslesha star should worship at the temple at least once in their lifetime.

The Goddess AdhiParasakthi bestows the grace of ArumarundhuNayaki at this temple. Aslesha is in the Zodiac sign of Cancer, which has many medicinal qualities and can offer assistance with taking medicines. If the Moon travels through Aslesha during the waning cycle, it is a powerful time for people to gain relief from illnesses and ailments. Aslesha is also a favorable star for conducting planetary (Navagraha) fire rituals or Dhanvantripoojas.

Aslesha has the ability to help the body recover from mental and physical pain as well as heart sorrow. Some people may not struggle with physical ailments, but have mental illnesses or confusion. Aslesha star days are a positive time for these people to make offerings at Thirundhudevankudi for the Goddess ArumarundhuNayaki. An abhishekham to Lord Sri Karkadeswarar (an aspect of Shiva) with milk from black tongued and black-nippled cow is also an auspicious offering to perform during Aslesha star days. This will assist with the healing process of a serious illness. Those who suffer from diabetes, blood pressure, cancer, heart problems, kidney disease, or stomach ailments will benefit by making an offering to Lord Shiva.

Generally, those born under Aslesha have the medicinal character needed to recover from illness. They should offer vibhuti (sacred grey ash) to Sri Karkadeswarar and kumkum (vermillion powder) to Goddess Sri ArumarundhuAmbikai at the Thirundhudevankudi temple. They can also offer vibhuthi and kumkum to hospital patients if they cannot visit the temple. This is a remedy for strength to recover from illness. Tuesdays, New Moon days and Aslesha star days during the waning cycle are auspicious times for people to walk around the Thirundhudevankudi temple at least 36 times. This will also assist with health issues.

Ashlesha natives, your incense is made with the herb Beauty Leaf Poon as prescribed by the Vedas.

Skilled in research and writing, sharp intellect, mystical, and the ability to entertain.

Each Nakshatra is divided into four quarters called padas that contain more specific characteristics of a person born during the pada of Ashlesha: