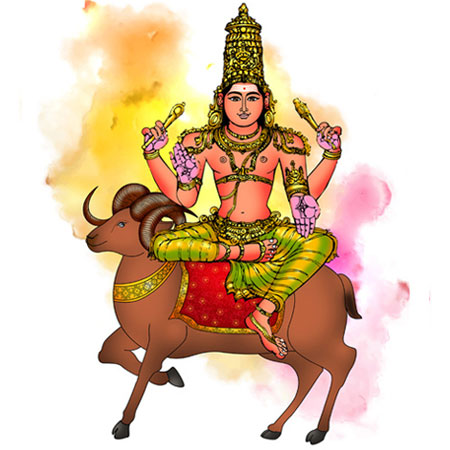 In the night sky, Krittika nakshatra is visible as a cluster of six stars known as the Pleiades. In Vedic astrology, Krittika resides in the sign of Aries as well as Taurus. The name Krittika translates as, "one who cuts" and the symbol is a razor or sharp object. Thus, a critical nature with both creative and destructive tendencies is displayed by this star.

Krittika is also represented by the element of fire as the presiding deity is Agni, the god of fire. Those born under this star are combative with a fiery disposition. The Sun is the ruling planet, which also signifies fire and at the highest level, purification. Krittikanak shatranatives have an adventurous spirit and are constantly looking to fuel their fire with new information and experiences. Physical activity and an energetic demeanor are characteristic of those born under this nakshatra. Kartikeya (Muruga), who was raised by the six (the stars of Pleiades) of the six sages, is also associated with Krittika. There is a nurturing quality to this star, which is often hidden behind a tough exterior.Those born under this nakshatra are commonly involved with teaching or universities. They may have a sharp tongue and dislike imperfection, yet they have amazing will power, independence and the capacity to support others. This is a star of courage, awareness and purification.

The star of Fire

Mixed (both sharp and soft)

Mars, as ruler of the Aries;
Venus, as the ruler of Taurus;
Moon gets exlated in the 1st pada of Krittika

Agni, the God of Fire

The temple which is most significant for Krittika nakshatra is located in the village of Kanjhanaaharam, near Mayiladuthurai in Tamil Nadu, India. This shrine is the most auspicious temple for those born under Krittika and they should visit this shrine to make offerings to Lord Shiva.

At this sacred vortex, Lord Shiva appears in the form of Sri Kathra Sundareswarar. The word Kathra translates as "to endure with eminent capability." Lord Shiva was in a state of stillness while performing Kathra Jyoti Yoga. Goddess Parvati offered a golden tender coconut while performing penance which allowed Shiva to attain deep serenity. It was in this deep state of Kathra Jyoti Yoga that Shiva emerged as Sri Kathra Jyoti Peruman and Goddess Parvati arose from the gold tender coconut as Sri Tungabala Sthanambighai. Karthika Sundareswarar has the ability to produce six brilliant lights known as Karthigam light, through which Lord Muruga originated.

The Goddess, Sri Tungabla Sthanambighai, is personified at this sacred temple with the Keera Sathra parrot on her left should. This parrot chants the Vedas and the gives darshan known as VedmirthaKeeran. It is auspicious for girls of a mature age to receive this darshan before entering marriage. In addition, water from the sacred river Tungabhatra should be used to perform an abhishekam for the Goddess. Those who visit this temple and make offerings can release the negative effects of evil eyes cast upon them as well as appease challenging eighth house planetary transits.

Those born under Krittika nakshatra should offer ghee lamps in earthen pots and silk clothes to the poor people at the temple. As the star Krittika gained its brightness at this shrine, offering prayers on the Krittika star day brings prosperity.

Krittika natives, your incense is made with the herb Fig as prescribed by the Vedas

Determined to achieve greatness; tenacious will; sharp, cutting and penetrating by nature.