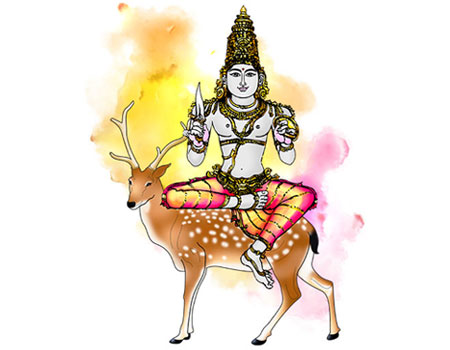 Swati nakshatra is represented in the night sky by the single star of Arcturus (Alpha-Bootis). This is the main star in the constellation of Bottis. In the astrology chart, Swati resides entirely in the sign Libra. Swati translates as "Independent one." The symbol of this nakshatra is a young plant blowing in the wind, which represents flexibility and agility as well as restlessness. The ruling deity Vayu, the God of wind, bestows a strong, yet gentle nature to this star. Rahu is the planetary ruler and signifies hidden potential. Those born under Swati nakshatra are humble and often need to be informed of their own potential for greatness. They have an openness to learn new information, but must also avoid indecision and procrastination. Those born under Swati are diplomatic and they use charm to navigate the world. These people have strong beliefs in social etiquette and try to fit into society. Swati can bring success later in life. The essence of Swati is balance and people born under this star take their time to act.

Venus, as the ruler of Libra. Sun gets debilitated in this star

Vayu, The God of wind.

The sacred site with most significance for Swati star is located at Sihthukkadu near Poondamalli in Tamil Nadu, India. This site connects the sacred shrines of Sri Thaanthreeswarar Siva Temple and Sri Sundararaja Perumal Temple. It is important for those born under Swati star to visit the sacred energy vortexes of Lord Shiva and Lord Maha Vishnu at Siththukkaadu.

Swati nakshatra is a saintly word that consists of energy representing the oneness of Siva and Vishnu. Worshipping at both these temples on Swati star day, Monday or Dwadhasi (12th waxing moon phase) would bestow grace and significant benefic effects for the solidarity of the Saivites and Vaishnavites.

Sri Prasanna Kundhala ambhigai Samedha Sri Thaandhreeswara Siva Moorthy is also a sacred shrine bestowing grace of yoga jothi, an energy that personify in the shape of sound and light. Mixing both light and sound is known as Kundala Yogam and through this mixture, Kundala Jothi comes forth. On the Swati star day, at Siththukkaadu Siva temple aunqiue Kundala Jothi shines brightly. A small earthen lamp lit on Swati star day at this sacred shrine would bring Kundala Jothi energy for the whole world.

Kubera Moorthy worshipped at the sacred shrine situated at Siththukkaadu, the place of manifestation of abundance of wealth. He performed penance for thousands of years by standing on the toe of his right foot and worshiping with Nagalinga flowers to Kundhal ambhigai Samedha Sri Thaandhreeswarar. After performing abhishekham with the essence of Emblic Myrobalan fruit, he worshipped Lord Mahaa Vishnu in Sri Sundararaja Perumal Temple. Kubera Moorthy was granted the blessing to provide assistance in the form of immense wealth to those worshipping with great devotion at this sacred shrine.

Swati nakshatra contains the energy of absorbing, spreading and fulfilling the divine energy on the divine objects such as rudraksha beads, bells, and sacred thread. Siththukkaadu is one of the sacred shrines where this energy can be easily accessed. In addition to those born under Swati star, visiting this sacred temple can benefit those who are married without the blessings of their parents or family members as well as doctors and people in the medical professions.

Swati nakshatranatives, your incense is made with the herb Jarul as prescribed by the Vedas.