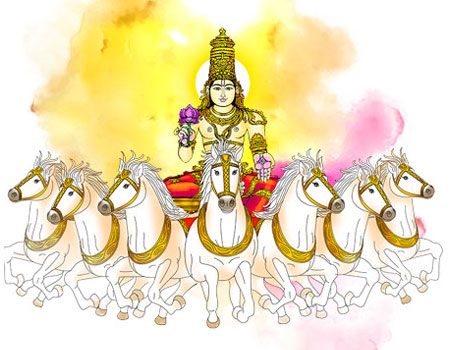 Alpha, Beta, Delta, Gamma, and Epsilon-Corvi. The constellation Corvi is visible in the night sky just below the bright star of Spica. In the astrology chart, Hasta resides completely in the sign of Virgo. The word Hasta translates as "the hand" and signifies all activities performed with the hands. Those born under this star are industrious, intelligent and reasonable. This nakshatra also symbolizes agreements and greetings as represented by the hand shake. The ruling deity Savitar, an aspect of the Sun, is jovial and carefree. Savitar gives the ability to use the hands in a skilled, crafty, or cunning manner. They can also be used for trickery and gambling. Savitar has the power to give life so Hasta can be associated with childbirth and establishing a family. Hasta nakshatra is an optimistic star with an amazing capacity to create. Those born under this nakshatra have the ability to manifest an object of desire in their hands.

Mercury, as the ruler of Virgo. Mercury gets exalted in this star.

Hand or open hand
in blessing

Savitar; the Sun God who
imparts creativity and
transforms energy.

The sacred energy vortex that resonates with the star Hasta nakshatra is located in Komal near Kumbakonam in Tamil Nadu, India. People born under Hasta should visit this temple at least once during their life time.

Those who visit the temple at Komal and worship Sri Kirupa Koobareswarar (an aspect of Lord Shiva) and Goddess Sri Annapoorani will receive the blessings of divine grace and compassion. People born under Hasta star should worship this form of Shiva with folded hands in prayer, meditation and yoga. It is also recommended for these people to perform the ancestor ritual known as tarpanam. While making the tarpanam offering, water passing over the lines of the person’s hands connects their energy with the energy of the ancestors.

The connection of this temple to Hasta nakshatra begins with the story of Goddess Parvati, who wanted to understand exactly what Lord Shiva experienced as the ruler of the Universe. Shiva participated in Divine sport, so Parvati decided she too would take part in Divine sport to gain the knowledge of Shiva. Parvati playfully covered Lord Shiva’s eyes with her hands, but this simple action caused the entire universe to become in capacitated. She had stopped the flow of water, the movements of planets and everything in the universe became still. Overcome with guilt, Parvati asked Lord Shiva for his forgiveness.

Shiva explained to Parvati that due to her actions, he would disappear into the light known as "Hastayama Jyoti" created by his own hands. Parvati would then incarnate as a cow wondering around the world in search of Shiva until she reunited with him in the form of "Hastayama Jyoti." Parvati was quite distressed about the situation, but followed Shiva’s orders and wandered the earth as a cow, searching for Lord Shiva’s light. Finally, on Hasta star day, Lord Shiva revealed his light to Parvati and bestowed darshan as Sri Kirupa Koobareswarar.

Those born under Hasta nakshatra can offer foods that require the use of one’s hands during preparation to the poor. Making sweet or savory cakes by hand, is a good example of such an offering. This will help assist those who are poor to acquire wealth. It is also recommended that people who are suffering from depression visit the temple at Komal. To make an offering on Pradosham days, Mondays and Wednesdays is a powerful remedy for depression. Finally, those who have marital troubles can walk around this temple from left to right as a remedy for any challenges with marriage.

Hasta nakshatra natives, your incense is made with the herb Neem as prescribed by the Vedas.