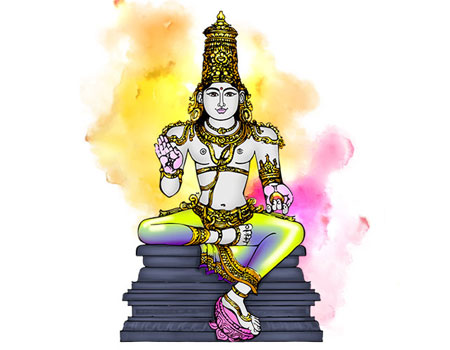 In the night sky, Magha nakshatra is represented by Regulus (Alpha-Leonis), the brightest star in the constellation of Leo. The name Magha translates as “Magnificent” and is symbolized by a royal throne. People born under Magha have the ability to use power and position to attain their highest goals. The core of this nakshatra is achievement and nobility. Magha is ruled by the Pitris, the ancestors of the human race. Those born under this star have a strong connection to their lineage and often have grand expectations for their children. Magha nakshatra produces an appreciation for tradition and ritual. People born under this nakshatra take pride in where they came from and maintain established traditions. This star demands strong morals and can give honor and prestige if one follows an ethical code. Those born under Magha are magnanimous and have a regal, even lion-like demeanor.

"Mighty" or "The Magnificent"

“The Star of Power”

Sun, as the ruler of Leo.

Pitras, the Fathers of
Humanity; ancestors.

The sacred temple associated with Magha star is Thavasimadai Sri Mahalinga Swami located in Thavasimadai near Dindigul in Tamil Nadu, India. Those people born under Magha star should worship the sacred shrine at some point in their life time.

In ancient times, this gigantic Lord Shiva temple was known as Thapas Viradam. It is presently in poor condition, with only one or two small places where deities manifest in the temple. This temple has been neglected during the Kaliyuga with little or no offerings being made to the deities. It is truly the responsibility of devotees to renovate the temple and return this sacred shrine to the ancient prominence it once had. There are still abundant energies generated through austerity at Thavasimadai.

The people born under Magha nakshatra have the magnificent energy of leadership. They should be involved in charities, philanthropy, and perform penance with the guidance of a spiritual teacher as they possess spiritual energy to gain distinction in every field. They are capable of success in government, administration, and worldly affairs. Magha star is ruled by Ketu, people born under Magha should worship at this temple during days favorable to Ketu and then they will receive the benefic effects. Abhishekam and worship should be performed to Lord Shiva at this temple. An offering of puffed rice, the favorite of the great sages, can be made to the deities and then given to the poor.

There are two goddesses at Thavasimadai Sri Mahalingeswarar temple. These goddesses are placed at the side of the main shrine, as this is the custom of worshipping the goddesses. In ancient times thousands of rishis and saints were in deep mediation to perform penance at this temple. The women, wanting to refrain from disturbing the rishis and saints, developed the habit of worshipping from a distance.

Mahaththavam is when the service to God is entrusted by the spiritual teacher continues until the teacher orders it to stop. The shrine at Thavasimadai is filled with abundance of Mahaththava superhuman powers. The great sage, Bharadwaja Maharishi conducted meditation here. Those born under Magha star would benefit by visiting the temple and returning it to a place of spiritual austerity.

Magha nakshatra natives, your incense is made with the herb Banyan as prescribed by the Vedas.

Each Nakshatra is divided into four quarters called padas that contain more specific characteristics of a person born during the pada of Magha: