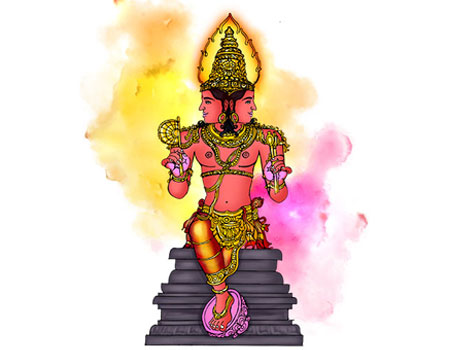 The nakshatra Purvabhadra is located in the constellation Peagasus, the winged horse. It is comprised of the two stars, Markab (alpha Pegas) and Scheat (beta Pegasi). The symbol for this star is the front legs of a funeral cot, which indicates a strong connection to the element of fire. People born under Purvabhadra are independent and capable of sacrificing or purifying themselves for a higher purpose. They often have idealistic goals and aspirations for the improvement of society. This star bestows charisma and eloquent speech that can be used to motivate and educate. There can also be a tendency to criticize or become cynical. The level of intensity and the capacity for transformation are extremely strong in Purvabhadra nakshatra. This is a star of tremendous perseverance.

"The former one who possesses lucky feet"

“The Scorching or Burning Pair”

Se, So, The, Di (see Padas of Purvabhadra)

A sword, two front legs of
a bed or a funeral cot, two
faced man

Purvabhadra nakshatra is divinely connected to Renganathapuram Sri Kamakshi Samedha Tiru Aaneswarar Temple. This sacred temple is located in Renganathapuram, which is near Tirukkattuppalli in Tamil Nadu, India. Those born under Purva Bhadrapada star should worship at this sacred site at least once during their life time.

The number 7 is associated with the elephant. This is symbolic as Sri Kamakshi, who incarnated as the world’s mother, rode in a chariot pulled by seven elephants. The number 7 is also important because seven statues (murthi) manifested on a bael tree at this temple. Thiru Aaneswarar was one of these seven deities. Thiru Aanam means "seven colored rainbow." It is a propitious sign to receive the darshan of a rainbow at this temple. Thus, the temple is appropriately named after Sri Kamakshi and Tiru Aaneswarar.

Those people born under Purvabhadra nakshatra can worship at this shrine for seven days and anoint the statues with plantains, honey, ghee, sugar, and offer seven garlands. This will eliminate the karmic afflictions of seven lifetimes. Also, it is recommended to donate seven colored garments at this temple to remove ancestral curses.

Those who are born under a different star but wish to visit this temple will also benefit. They may worship at this sacred shrine continuously for seven days. Meditation, contemplation and yoga performed at this temple will produce benefic effects and assist with career problems. One can also perform a pooja to seven elephants to remove karma from seven lifetimes.

Purvabhadra nakshatra natives, your incense is made with the herb Mango as prescribed by the Vedas.