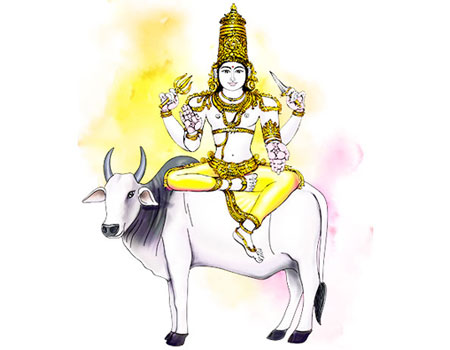 In the night sky, Ardra nakshatra is Betelgeuse (Alpha-Orion), the brightest star in the constellation Orion. In the astrology chart, Ardra is located entirely within the sign of Gemini. This nakshatra is represented by a teardrop, which can symbolize both sorrow and renewal. Those born under Ardra nakshatra usually go through intense lessons to clear old patterns and gain new understanding. The ruling deity is Rudra, the God of Storms. He is a destructive aspect of Shiva who brings chaos and confusion. Rahu, the ruling planet of Ardra, also brings disorder and a thirst for knowledge. Those born under this nakshatra have an investigative mind and are oriented toward research. They are not afraid to voice opinions or use intimidation. The highest level of Ardra is transformation through cleansing. This is an extremely sensitive star that links mental ability to emotion.

“The Star of Sorrow”, “Star of Oppression”

Mercury, as the ruler of Gemini.

Rudra, the God of Storms
and Destruction.

The sacred energy vortex which resonates with Arudra nakshatra is located near Pattukkottai in Tamil Nadu, India. People born under Arudra (Tiruvadhirai) star should worship at this temple at least once during their lifetime.

Adhiveeraraman, an emperor who was born under Arudra star, worshipped at this sacred energy vortex. He made offerings to the deities and repaired the temple structure of this shrine, thus the name of the temple became Adhiram pattinam. This is a rare shrine for those born under Arudra star. The radiant light emitted from Lord Shiva’s third eye is known as Raivatha energy. Once a year, this light reaches the world. This occurs in the month of Markazhi on Arudra star day. It is referred to as Arudra Darshana day. In addition, the land receiving this light is known as Adhiram pattinam.

Arudra, also known as Tiruvadhirai, is the star of Lord Shiva, while Shravana, known as Tiruvonam, is the star of Lord Vishnu. The prefix – thiru means "Sri" or "wealthy." Lord Shiva has great compassion for people in need and he provides them with sanctuary in the universe during Pradosham and Arudra star days. The Arudra region of the universe is one such place where Shiva offers a safe haven during these days. In the sacred space of Arudra, if anyone commits an unethical deed, they must learn devotion as a means to rectify their deed with the grace of Lord Sri Abhayavaradhesswarar.

Those born under Ardra nakshatra can visit Adhiram pattinam on Arudra star days and Mondays to offer food, almonds, pumpkin, cumin, and jackfruit to the poor at this temple. This offering will relieve problems caused by the movement of malefic planets.

Ardra nakshatranatives, your incense is made with the herb Thippili as prescribed by the Vedas.

Each Nakshatra is divided into four quarters called padas that contain more specific characteristics of a person born during the pada of Ardra: