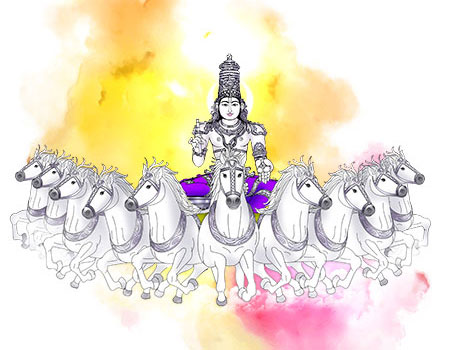 In the night sky, Mrigasira nakshatra consists of four stars located in the constellation of Orion: Bellatrix (Gamma-Orionis), Pi2, Pi3, and Pi4-Orionis. Bellatrix is the brightest of these stars and is located on the right shoulder of Orion. These stars form the shape of a deer’s head, which is the symbol of Mrigasira. In the astrology chart, Mrigasira bridges the signs Taurus and Gemini.

Those born under Mrigasira nakshatra have a gentle, charming character and are constantly seeking knowledge. They have mental dexterity as well as a great capacity to comprehend information. They must be careful not to over extend themselves or become restless, thus physical movement is helpful in creating balance. Mrigasira is the most curious of the nakshatras and supports a good sense of humor. Mrigasira is a star of variety as people born under this star go through diverse experiences to find their authentic purpose in life.

"Deer’s Head” or “The Benevolent”

The sacred shrine of Sri Aadhi Narayana Perumal is located in the village of Ennkann, near Koradacheri in Tamil Nadu, India. Those born under Mrigasira nakshatra should worship this sacred shrine at least once during their lifetime.

The story of the Sri Aadhi Narayana Perumal temple begins with an emperor who was hunting animals in the forest. The emperor disturbed the meditation of Brihu Maharishi, who was performing penance. Brihu Maharishi decided to curse the emperor with a lion face and the only way for the emperor to overcome this curse was to follow a noble path.

The energy of the Sri Aadhi Narayana Perumal temple is known to attract the blessing of the mythical bird, Garuda, carrying Lord Vishnu as Lord Sri Aadhi Narayana Perumal. Brihu advised the emperor to create a festival to honor Lord Vishnu at this temple, in which he should carry Vishnu on the vehicle of a lion, a bull, a peacock, a swan and a sheep. The emperor followed Brihu’s guidance, he renovated the temple and he prayed to Vishnu at this sacred vortex. The emperor’s lion face disappeared and he joyfully began teaching devotional worship at the temple. He created a grand festival with 108 vehicles to carry Lord Vishnu. This festival began to attract distinguished people, architects and sculptors to the temple.

The auspicious energy of this temple can assist people with matters concerning their profession or job. It is beneficial to perform abhishekham on Mrigashira days, Vishnupati days, Wednesdays and Saturdays. Also, offering a sweet drink to the poor will help overcome anxiety and worry. It is advantageous to walk around this sacred shrine while carrying a ghee lamp. This is a remedy for relieving conflicts with enemies. People can also make an offering of sweet rice, milk and nuts to the poor to improve their reputation. And finally, anointing Garuda, the sacred bird, with butter along with sandalwood past for Vishnu is favorable for prosperity and health.

Mrigasira nakshatra natives, your incense is made with the herb Ebony as prescribed by the Vedas.

Each Nakshatra is divided into four quarters called padas that contain more specific characteristics of a person born during the pada of Mrigasira: