Ekambareswarar Temple is a prominent Shiva Temple in South India. This is situated in Kanchipuram. The prominent deity is Lord Shiva who is worshipped as Lord Ekambareswarar or Ekambaranathar in the form of a Lingam. His consort is Goddess Parvati who is depicted as Godavari Amman. This is one of the “Pancha Bootha Sthalam”, connoting “Earth” or Prithvi. This temple is highly revered by Tamil Saints and Nayanmars, who are highly revered. This temple also has a shrine for Lord “Nilathingal Thundam Perumal”, who is one of Lord Vishnu’s incarnations. This temple is also a prominent Divya Desam which refers to the sacred abode of Lord Vishnu. 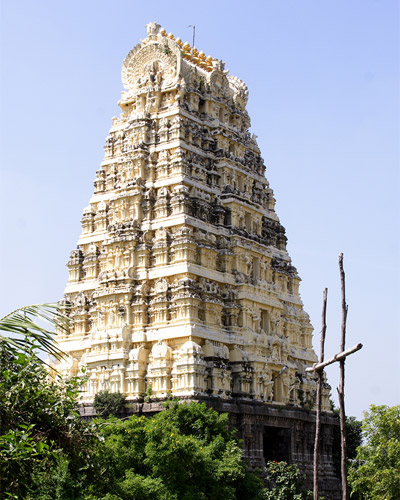 Once Lord Shiva cursed his consort, Goddess Parvati to become dark. To regain her golden complexion, she asked her brother, Lord Vishnu, to suggest a remedy. So, Lord Vishnu suggested that Goddess Parvati pray under the mango tree towards Lord Shiva in the divine city of Kanchipuram. Lord Vishnu also directed the rays of the Moon to fall on Goddess Parvati. Even after Lord Shiva sent the Ganges to disrupt her penance, Goddess Parvati was able to convince her and with the help of Goddess Ganga, they built a beautiful Shiva Lingam, later called as Prithvi Lingam.

This temple has been mentioned in “Tamil Sangam”, where all the Tamil poets rendered their literary works. One among the 64 Nayanmars was a fisherman who chose to worship the Lord by washing the clothing of all the devotees of Lord Shiva. Lord Shiva once tricked him by approaching him as an old Brahmin and asked him to wash his clothes. The Lord then sent a lot of clouds which disrupted the work of the saint and he also banged his head hard. Moved by his devotion, Lord Shiva himself came and protected the saint as Lord Ekambareswarar.

Brahmotsavam during the Tamil month of Panguni is celebrated for ten days. Thirukalyanam festival, the marriage union festival of Lord Shiva and Parvati, is conducted during the months of April and May, where the deities of Lord Shiva and 63 Nayanmars are taken across the temple streets. Along with this, Maha Shivaratri, Tamil New Year day, Deepavali, Arudra Darshan, Makar Sankranti are also important festivals.

Lord Shiva is highly benevolent. He protects his devotees like an amulet. People would visit this temple to protect themselves from the clutches of their enemies and gain positive energy in life. Many people come to this temple to gain advancements in life like good family life, job, career and good health.

How to reach Ekambareswarar Temple

The nearest airport in Chennai, which is nationally and internationally connected. There are numerous modes of local transport from the airport to the temple.

Kanchipuram city is well connected from various parts of Tamil Nadu. Kanchipuram has its own railway station, very near the temple.

There is a bus stop very near the temple. Apart from buses, there are numerous local options like autos, taxis which can take one very close to the temple.