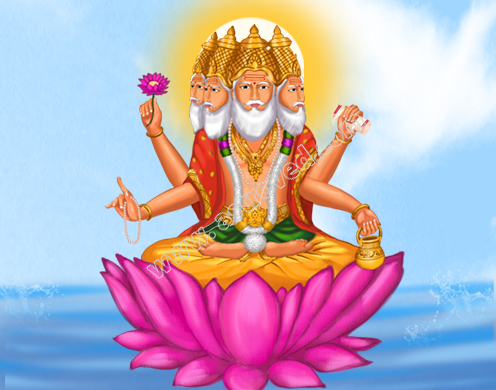 Brahma is the God of creation. He is one among the supreme Gods and is regarded the first among the Trimurti, the holy trinity, who are responsible for the three fundamental and core activities of existence, that is, creation, preservation, and destruction. He is also regarded Svayambhu (self-created), Vagesa, the God of speech, the creator of the universe, and the giver of the sacred Vedas. Saraswati, the Goddess of knowledge is his consort.

Brahma is generally shown as a wise sage with a flowing white beard, with four faces facing the four directions. He is the God of knowledge and creativity, and hence he does not have any weapons. In one of his four hands, he holds the Vedas, the sacred texts; in the next, rosary beads indicating time; a pot of holy water used for creation, in the third; and in the last, he holds a ladle as a means of feeding the sacrificial fire. The four Vedas are said to have emerged out of his four mouths. He is seated in a lotus attired in pure white and has Hansa, the white swan as his mount. Goddess Saraswati, his consort is believed to be the energy behind his creativity.

Lord Brahma is the god of creation, who is believed to have created the entire universe, beginning his creation from the ten Prajapatis (fathers of the human race) and Sapta Rishis (seven great sages), who later helped him create the world. Brahma has great wisdom and is often related to creativity and understanding and is thus responsible for bestowing knowledge to all gods and human beings.

While there are several references to Brahma in many ancient texts, different scriptures speak differently about him. While some term Lord Brahma as the self-born, supreme creator of the universe and its beings, many others hold different views. Some regard Purusha or Brahman as the supreme creator while considering Lord Brahma as the secondary one. Bhagavata Purana portrays him as rising from the ocean of causes when the universe and time are also born. Many scriptures regard him as born in a lotus that emerged out of the navel of Lord Vishnu, the preservation archetype, as he lies reclining in his serpent couch in the ocean of milk. Brahma, just as an ascetic, went into deep contemplation meditating on Vishnu, attained realization, obtained his creative powers, and then started with his remarkable work of creation. He combined nature and matter, called Prakruti, with the soul and spirit, known as Purusha, and caused a brilliant array of creatures of a multitude of kind, to be created. However, there are texts, which believe that there are many Brahmas, each being specific to a Kalpa meaning an eon. Such theories regard him as the entity, who originates, exists and ends with an eon, and that this cycle is repeated with every Kalpa.

Whatever be the legend, the fact remains that in spite of being regarded as one among the supreme Gods, Brahma is considered as some sort of a lesser God. As per a legend, once his consort was playing on veena (string instrument), and he remained so absorbed in the music that he failed to receive a powerful sage properly at his abode. The sage felt disrespected and cursed Brahma that neither there would be many temples for him, nor many people would be worshipping him. Hence, there are hardly any temples for him and that his worship is also quite limited among the people.

There are a few temples dedicated exclusively for Lord Brahma in India. Brahma temple in Pushkar, Rajasthan can be taken as the most famous of these. There are also well known Brahma temples in Asotra, Rajasthan, in Thirunavaya, Trivandrum (Padmanabhaswamy Temple) and Thripaya (Trimurti Temple) in Kerala, and in Kumbakonam and Kodumudi in Tamil Nadu. Worshipping him can enhance your creativity, grant divine wisdom and knowledge, help gain Jupiter’s blessings and bestow success in your efforts.

Festivals known as Brahmotsavam are celebrated in many of the major temples around India. ‘Brahma Utsavam,’ means ‘grand celebration’ or ‘celebration performed by Brahma’ refers to the annual celebrations that are dedicated to the deities of the temples, and are believed to be organized and conducted by none other than Lord Brahma himself. According to mythology, this occasion is considered to have immense cleansing power and clear all the sins committed.

Lord Brahma is the god of creation, who is regarded as Svayambhu (self-manifested), Vagesa, the God of speech, the creator of the universe, and the giver of the sacred Vedas. Saraswati, the Goddess of knowledge is his consort.