Lord Vishnu, along with Shiva and Brahma forms the Holy Hindu trinity (Trimurti) and is revered in Vaishnavism as the Supreme being (Brahman). Venerated as the preserver and protector of The Universe, Lord Vishnu incarnates on Earth to restore balance and vanquish evil and destructive forces. He is present in all living beings, permeating all objects and life forms as the eternal Transcendental being. The Brahmanas describe Him as the fountain of all knowledge and the originator of the Holy Texts (Vedas). The ancient texts (Upanishads and Puranas) also extoll His deeds and hail Him as the Omnipotent being pervading all that is visible and invisible.

Vishnu is usually depicted reclining on the king of snakes (Sheshnag) along with his consort Goddess Lakshmi by His side. He is endowed with a dark or pale blue complexion and four arms representing His Omnipotence and all encompassing power. With a lotus flower in His lower left hand, a mace in His lower right hand, a conch in His upper left hand and the Sudarshana Chakra in His upper right hand, Lord Vishnu represents the epitome of Divinity.

Though Lord Vishnu is credited with having appeared in a myriad forms, He is usually associated with 10 principal forms known as Dashavatara.

Matsya: To save Manu from the deluge

Kurma: A tortoise used to churn the ocean for nectar

Krishna: Vishnu incarnate on earth and destroyer of evil

Kalki: Harbinger of the end of time 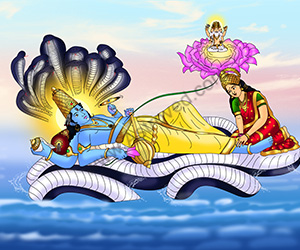 The Vedas associate Vishnu with the power of light floating on the surface of the primeval ocean reclining on a thousand-headed snake called Shesha. The three steps of Vishnu (Trivikrama) is referred to as an act of creation and He is described as the one who supports Heaven and earth. Also, according to Vedic Mythology, He resides in the illustrious company of departed souls (Atman).

Worshipping Him with Tulsi leaves or Lotus flowers is considered highly beneficial. Sipping the sacred water through the palm along with offering Prasadam, are considered auspicious. Yellow clothes, yellow flowers, incense, ghee lamp and eatables like Rice Pudding and a sweet pongal made of rice and jaggery (Naivedyam) are said to please Lord Vishnu immensely. Devotees also derive immense benefit by chanting the thousand names of Lord Vishnu mentioned in the Holy verses of The Vishnusahasranamam on a daily basis.

The embodiment of mercy and compassion, Lord Vishnu is easily pleased with prayers and chanting the Vishnu Mantra daily is said to bring Health, Happiness and Prosperity. He grants the desires of all those who worship Him and is revered as the remover of all obstacles and fear. It is also said that Goddess Lakshmi confers Prosperity and Wealth on all those who worship Lord Vishnu.