Along with Brahma and Vishnu, Shiva forms a part of the Holy Trinity which is revered by Hindus all over the world. Lord Shiva is considered as formless, timeless, limitless and transcendent with many fearsome and benevolent aspects. He is attributed with bringing the Gangs down to Earth and many devotees worship Him as the Supreme Bring. He is also hailed as the patron God of Yoga, Meditation and Arts. The third eye on His forehead indicates His ability to transform the world by destroying existing life and bringing about new forms of existence.

Lord Shiva is often depicted with matted hair and bearing the crescent moon on his head. His right hand is shown garlanded with a string of rosary beads made of Rudraksha. With his body covered in ashes,(vibhuti) and seated on a tiger skin, he is shown garlanded with a serpent and a Trident in His hand. As Ardhanarishwara, Lord Shiva’s body is portrayed as one half male and the other half female (Androgynous). He is also often portrayed as the dancing Nataraja, the patron of Arts and the God of dance. Nandi, the bull serves as Shiva’s mount and Mount Kailash is his traditional abode. He is also represented with a blue throat for consuming the poison from the churning of the ocean and thus he is also called as Nilakantha. Some south Indian icons also depict Him wielding an axe and a deer.

Incarnations of the deity (important to stress His deeds)

The Vedic Deity Rudra, displays many characteristics of Lord Shiva and is attributed to be one His Avatars. Lord Hanuman, who helped Lord Rama defeat Ravana in the epic Ramayana, is often depicted as one of the Avatars of Lord Shiva. Sage Durvasa is also hailed as being an aspect of Shiva. The philosopher Adi Shankara, who is credited with reviving Hinduism in India, is also considered as an Avatar of Lord Shiva. 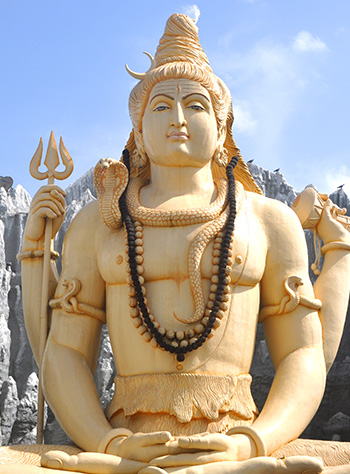 According to Vedic mythology, one day, a great blazing pillar appeared, with roots and branches extending into the earth and sky. Both Brahma and Vishnu set out to locate the start and end of that pillar. Brahma flew up to find the top of the pillar, while Vishnu dug deep into the earth to look for its roots. Both were unsuccessful in their attempts to find the origin or end of the pillar. Upon their return, they were amazed to see Lord Shiva emerging from an opening in the pillar. Both hailed Shiva’s immense power and accepted Him as an equal. Thus was formed the Holy Trinity of Shiva, Vishnu and Brahma.

Lord Shiva loves all wild things and is worshipped with leaves of bel, and bhang, along with flowers of aak and peeli kaner. Fruits of ber, seeds of Rudraksh, sandal wood and milk weed are sacred to Him. Ber or jujube fruit is also considered sacred to Lord Shiva and offered with great devotion and respect. Devotees of Lord Shiva offer worship to the Shiv Lingam which is considered to be the Fountain of Life, by first anointing it with sandalwood paste and then reverently pouring water, milk or panchamritam over it which is called Abhishekam or Hydrating the Deity.

Worship of Lord Shiva is said to absolve one of all sins and liberate him/her from the cycle of birth and death. His name itself denotes auspiciousness and people pray for His forgiveness and benevolence to bring about positive changes in their lives. On the occasion of Maha Shivaratri, the day when Shiva married Parvati, devotees celebrate the Union of the Cosmic couple with great fervor and piety.