River Ganga is one of the most sacred and important Indian rivers which flows for around 2,525 km. It is believed to emancipate one from sins and rebirth. Goddess Ganga is depicted with a Crown and sitting on a crocodile, her Vahahna. She holds a water lily in one hand, and a lute, a musical instrument, in the other hand. Goddess Ganga resides in the matted hair of Lord Shiva and descended to earth to bless human beings to take them to the higher pedestal of spirituality. Her significance is portrayed in the Vedas and Puranas. The ten-day festival, Ganga Dussehra, is celebrated to commemorate her descent from heaven to earth. Many people immerse the ashes of their deceased relatives in the Ganga River, to liberate their souls and thereby help them to attain salvation.

Goddess Ganga is believed to be the daughter of Lord Brahma. She was born from the spout-shaped vessel known as Kamandala when Lord Brahma was washing the feet of Vamana, an incarnation of Lord Vishnu. Goddess Ganga is also depicted as the daughter of King Himavat and Queen Menaka in the Valmiki Ramayana. She is also depicted as the sister of Parvati and the consort of Lord Shiva. Vishnu Purana says that Goddess Ganga originated from the sweat of Lord Vishnu’s feet.

The Arrival of Goddess Ganga on Earth 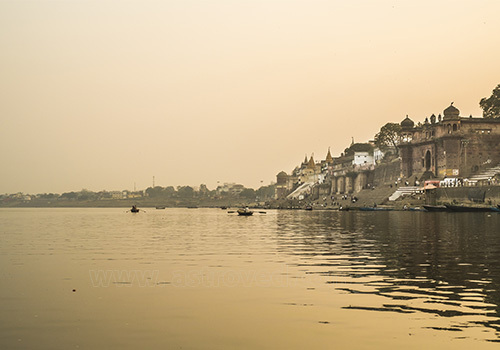 There is an interesting story which narrates how Goddess Ganga was brought to the world. Once, King Sagar was ruling the kingdom of Ayodhya. He was an ancestor of Lord Rama and was from the Iksvaku lineage. He wanted to do a great homa called Ashwamedha Yaga, where a horse is worshipped and sacrificed to gain more power. Lord Indra, the king of Devas, became envious and stole the horse which was kept to perform the Yaga. He tied the horse near the ashram of Sage Kapila.

King Sagar, along with his 60,000 sons, went in search of the horse and found it near the sage’s ashram. They assumed that the sage stole the horse. With rising anger, they disturbed the meditation of the sage. All this made the Sage highly furious. He used his yogic power and burnt the princes to ashes. Upon knowing this, King Sagar was highly disturbed and asked his grandson, Prince Anshuman, to search for the princes. Prince Anshuman found a heap of ash in front of the horse and also saw Sage Kapila near to it. He immediately understood what had happened. The prince pleaded for the salvation of his deceased kin. He was instructed to bring the holy Ganga to earth to wash away their sins and help them gain salvation.

King Anshuman started the penance but was not fruitful in this mission. His son, King Dhilip, also tried to bring back his ancestors to life, failing which he passed on the mission to his son, King Bhagirathan who prayed to Lord Shiva. On his request, Lord Shiva sent the Goddess Ganga and gave salvation to his ancestors. Goddess Ganga was so forceful that she swept away the earth. King Bhagirathan then prayed to Lord Shiva to hold her in his matted hair. Thus Lord Shiva was named as Ganagadharan, as he holds the River Ganga in his matted hair. Once the river touched the ashes, all the 60,000 ancestors of King Bhagirathan were blessed and ascended to heaven.

King Shantanu was the king of Hastinapura. He once saw a maiden on the banks of the river Ganga and wanted to marry her. She was none other than Goddess Ganga. He requested her to marry him. She also agreed, but on condition that she should not be questioned for her actions. King Shantanu became extremely happy and agreed. Goddess Ganga gave birth to a baby boy. To the king’s, shock, she dunked the baby boy into the river. Year after year, Goddess Ganga dunked all the seven sons born to her in the river. King Shantanu was extremely furious with her, and asked her not to kill the eighth son. As he broke their pact, she placed the eighth baby boy in the hands of King Shanthanu and left for heaven. The son was named as Devabrata and was later referred to as “Bishma”, who later became the uncle for the Kauravas and Pandavas. Bhishma took a vow of celibacy and became a highly revered figure.

Many people would add a few drops of Ganga water for a ritualistic, bath as they believe it has sacred power. Many houses will have a sealed copper vessel with Ganga water. Before performing the last rites of a dead person, many people would pour the sacred water on the deceased so that he could receive salvation. It is believed that the Goddess Ganga would bless everyone with happiness and also purify their souls, which helps them to attain salvation.