The magnificent Jagannath Temple is located on the Eastern coast in Puri, Odisha and is an important pilgrimage destination particularly visited by ardent devotees of Lord Krishna. This sacred shrine is one of the Char Dham pilgrimage sites, every Hindu must visit once in their lifetime. Saints such as Adi Sankaracharya, Ramanuja and Ramananda are closely related to the temple and this is one of the revered temples to the Vaishnavites.

The main temple in Puri is surrounded by 30 temples, all of which are suggested to be visited before they see the main deity in the sanctum sanctorum. Konark and Bhubaneshwar along with Puri complete the Golden Triangle of Orissa, with their religious significance and cultural heritage forming the core of tourism in this state. 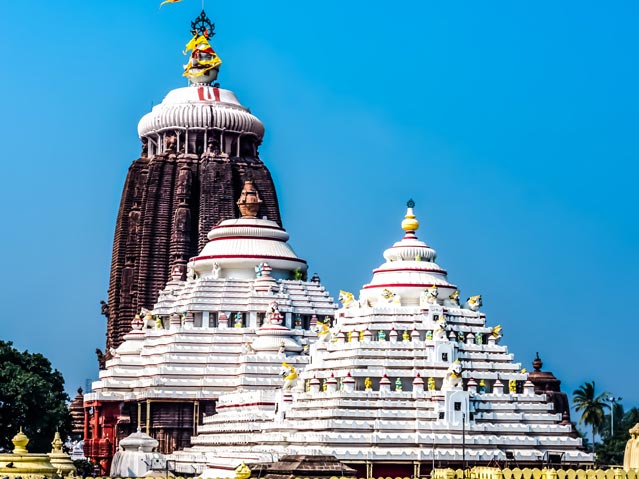 The history and heritage of Puri Jagannath Temple dates back to 3rd Century B.C. Copper plates of the Ganga dynasty, which were discovered recently reveal that the the construction of the current Jagannath temple was initiated by the ruler of Kalinga, 'Anantavarman Chodaganga'. The Jaga Mohan or assembly hall and the Vimana or Chariot was constructed during his ruling period. The current shape of the temple was given by the Oriya ruler Ananga Bhima Deva during 1174 CE. After the 1558 Afghan attack, Ramachandra Deb sanctified the temple and reinstalled the deities.

There is a legendary story behind the origin of the majestic temple which dates back to Treta yuga. It is believed that the original image of Lord jagannath manifested in the form of Indiranila mani or the Blue Jewel under a banyan tree near seashore. Admired by its dazzling beauty and power to grant instant Moksha, Lord Yama hid it in a secret place in the Earth.

Later, in Dwapara Yuga, King Indradyumna of Malwa wanted to find the image and ardently practiced penance to accomplish his goal. Lord Vishnu granted him with his wish and instructed him to find the image in a floating log in Puri seashore. The King managed to find the log and was told by Sage Narada to make three idols out of it and place them in a cupola. Vishwakarma, the architect of Gods was hired by the King to build the temple and it is believed that Lord Vishnu disguised himself as a carpenter to sculpt the idols, until he was left undisturbed.

After two weeks of deep silence from inside the temple, the Queen suspicioned that the carpenter did no work and wanted him dead. When the temple door was opened, Vishnu left the idols unfinished without hands. However, a divine voice instructed the King to install the idols at the temple.

The temple is one of the holiest Char Dham (four divine abodes) pilgrimage sites, with the other three being Rameshwaram, Dwarka and Badrinath. All the renowned Acharyas or Saints have visited this holy site. Saint Adi Shankara established his Govardhana matha (monastery) here. There is also evidence for the visits of Guru Nanak, Kabir, Tulsidas, Ramanujacharya, and Nimbarkacharya. Sri Chaitanya Mahaprabhu of Gaudiya Vaishnavism stayed here for 24 years and spread the love of God by reciting the Hare Krishna mantra. The place is also visited by Srimad Vallabhacharya, who performed a 7-day recitation of Srimad Bhagvat. His sitting place is still famous as "Baithakji."

The temple complex spans a huge area of 400,000 square feet and is surrounded by 20 feet high fortified walls, which is called as Meghanada Pacheri. The wall surrounding the main temple is called as kurma bedha. The temple is built in Oriya style of architecture with exquisite sculptures and is one of the beautiful monuments of India.

The main temple is curvilinear with an eight poked wheel called Srichakra or Nilachakra crowning the top. The sacred wheel is made out of Ashtadhatu (eight metals).

The idols of the main deities are wooden, unlike the traditional metals used in other Hindu temples. They are ritually replaced with their exact wooden replicas every twelve years. This ceremony is called as ‘Navakalevara’. An intricate set of rituals is carried out during the renewal of the wooden statues.

The pyramid roofs of the surrounding towers and temples rise in steps towards the main tower like range of mountain peaks.

Nila Chakra – Nila Chakra or the blue discus is an eight poked circular wheel and is an alloy of eight metals, mounted at the top of the main temple. The flag hoisted on the Nila Chakra is called as “Patita Pavana” which means Purifier of the Fallen” and is changed daily as per tradition. The flag is considered equally sacred to the main deities inside the temple. It is considered as the highly sacred and the most important iconic symbol of the shrine and is distinct from the Sudharsana Chakra placed along with the deities in the sanctum.

Singhadwara – In Sanskrit, Singhadwara means “Lion Gate” and is one of the four gates and faces East side, forming the main entrance of the temple. It bags its name from the giant statues of crouching lions guarding the entrance on either side. Apart from the Singhadwara, there are three other gates facing North, South and West. They are named after the animals that guard them namely: Hathidwara or the Elephant Gate, the Vyaghradwara or the Tiger Gate and the Ashwadwara or the Horse Gate.

There are a number of festivals celebrated at the Puri Temple drawing huge crowds from all over the country and is celebrated with great fervor and devotion.

Some of the important festivals are as follows:

Chandana Yatra: This festival is celebrated during the month of Vaishakha (Apr-May) for 21 days. The representative images of the main deities are taken as a grand public procession to a tank called Narendra Pokhari. The beautifully decorated and illuminated boats are taken around the tiny lake twice each day, the sight which is highly enjoyed and cherished by thousands of devotees.

Snana Yatra: Popularly known as ‘Deva Snana Purnima’, this festival is celebrated during the full moon day in the month of Jyeshta (May – June). This is the first occasion of the year, when the main idols are taken in procession out of the inner sanctum to Snana Vedi. They are bathed with 108 pitchers of water and Lord Jagannatha and Lord Balabhadra will be dressed with an elephant head like Lord Ganesha. From this ceremony, till the second day from the Full Moon , the deities are not to be seen and are worshipped secretly.

Ratha Yatra: The festival is commonly known as Car festival. It is also marked by the name ‘Gundicha Yatra’, taking its name after Gundicha, the Queen of King Indradyumna who built the first temple at Puri. This is celebrated in the month of Ashadha (Jun – Jul) every year for nine days. The main deities are taken from the inner sanctum in huge, gorgeously decorated chariots or rathas to Gundicha temple, 3 kms away from the main temple. The return journey to the main temple after nine days is called as Bahuda Yatra.

Makara Sankranti : This festival is celebrated in the month of Pausha (Dec – Jan). The deities are specially dressed on this occasion with boiled rice mixed with candy and fruit juices. This festival is believed to possess agricultural significance.

Nava Kalebara: It is one of the most magniloquent events associated with the Lord Jagannath temple. Literally meaning “New Body”, Nava Kalabera takes place when one lunar month of Ashadha is followed by another lunar month of Aashadha. This can take place in 8, 12 or even 18 years.

The festival is highly revered by millions of people and the budget for this event usually exceeds $500,000. The event involves installation of new images/idols of the main deities in the temple and burial of the old ones in the temple premises at Koili Vaikuntha.

Jagannath Puri Temple is one of the Char Dham (4 Holy Abodes of the Supreme God) and is considered as the most sacred pilgrimage site highly revered by Vishnu devotees. Jagannath is believed to be a special manifestation of Lord Krishna and the temple is visited by countless devotees every year. Visiting this temple and relishing the gaze of the Lord, gifts the devotees with miraculous benefits, fulfills their wishes and blesses them with a blissful life.

How to reach Puri Jagannath Temple:

By Air: Puri does not have its own airport. The nearest airport is in Bhubaneswar, 60 km from Puri. It is connected by daily flights to all major Indian cities like Delhi, Mumbai, Kolkata, Chennai and Vishakhapatnam.

By Rail: Express and Super-fast trains link Puri with major cities across India such as New Delhi, Mumbai, Kolkata, Okha, Ahmedabad, Tirupati etc. The station is about 1 km north of the town and one can avail cycle rickshaws and auto rickshaws to commute within the city.

By Road: Regular buses ply from all major cities of the country to Puri. Puri has well linked roads with state transport buses linking it with Bhubaneshwar, Cuttack and other nearby cities. Orissa Tourism Development Corporation runs buses for sightseeing in Puri.