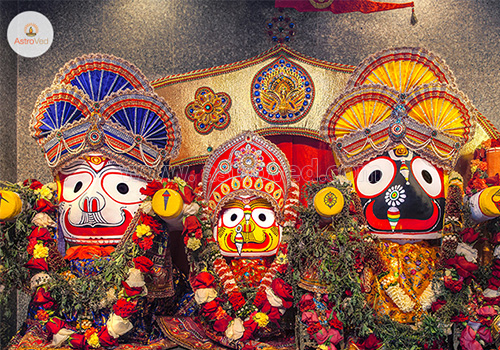 Jagannath is a form of Lord Krishna. ‘Jagat’ is the world or universe and ‘Nath’ is the Master or Lord. Jagannath is thus, ‘the Lord of the Universe.’ Jagannath is considered the God of great compassion and mercy, and remains as the presiding deity of the ancient and famous Jagannath temple in the coastal town of Puri, in the state of Odisha. Here, he is worshipped along with his elder brother Balarama or Balabhadra, younger sister Subhadra and the powerful divine disc, Sudarshana Chakra.

Jagannath temple is also one of the Char Dhams, the four significant temples found in the four corners of the country, the other three being, Badrinath, Dwaraka, and Rameshwaram.

Strange and unique, are the forms of Jagannath and his siblings. The images are all made of wood, drawn from the sacred Neem tree, known as Daru. While each of the idols has a face, large eyes, they have neither arms nor legs but have only two stumps projecting straight out, in place of hands. Jagannath is black, indicating inscrutability; Balabhadra is white, denoting enlightenment; and Subhadra is yellow, representing auspiciousness; while Sudarshana Chakra is red, standing for the races of the world.

Adding to the uniqueness of the Gods here is the practice, which involves the ceremonious replacement of the images of the deities every twelve or nineteen years with fresh ones.

The arms of the Lord are believed to be stretching out, only to embrace the devotees; and his large eyes that are without eyelids, are said to be looking after the welfare of the devotees without a wink of sleep. Jagannath is a big God, and everything around him remains big, being referred to as Bada or Maha (big or great). He is known as Bada Thakura, the Great Lord; his temple, Bada Deula, the chief temple; the road in front, Bada Danda, the grand road; the sea of Puri, Mahodadhi, the great ocean; and even the crematorium, Swargadwar, the Gateway to Heaven.

The greatest significance of Puri is Jagannath, and hence the place itself has come to be known as Jagannath Puri.

It is difficult to trace the hoary history of the temple and the Lord, as they are blended with mythology. Jagannath worship was initially done by the tribal communities, which later spread to all others. However, there are interesting stories about his origin.

As per one, Lord Krishna once appeared in the dream of the local king Indradyumna, asking the king to carve an idol of the Lord from a log of wood, which would be washed ashore. No sooner the king found the log, and then a carpenter appeared before him from nowhere, offering to carve out the idol, under the condition that no one should see or disturb him during his work. The king agreed and waited patiently outside the chamber, as the craftsman worked inside. A lot of time passed, and suddenly the king could hear no sound from inside. Deeply worried, he pushed open the door, only to find the idols in partially finished condition, while the carpenter was missing. The king was desolate to find the deities having only their faces and no other limbs. Then sage Narada appeared and explained that the carpenter was none other than Lord Vishwakarma, the divine artisan and that the images had taken shape in exactly the way Lord wanted them to be; he then advised the king to install and worship them with devotion.

The second story was of the female cowherds, who were discussing how much they loved Krishna, asking his sister Subhadra to ensure that Krishna did not overhear their talk. However, as Subhadra got lost in listening to their accounts, Krishna and Balarama were able to hear all the talk and got overwhelmed, along with their sister. Their hairs stood on end, their arms and legs were drawn in, and their eyes greatly widened, as they broke into big smiles.

These mythologies thus well explain the reason behind the strange form of the deities.

Offering your sincere prayers to Lord Jagannath can fulfill all your earnest wishes and remove any obstacles in your path.

Elaborate, traditional and ritualistic worship is offered to Lord Jagannath and other deities throughout the day and right through the year, in the huge temple of Puri.

The Jagannath Rath Yatra is celebrated as a huge festival here, when millions of people from all over the world assemble and pull the idols of Jagannath, Balabhadra and Subhadra in huge chariots, which resemble the temple structures. This annual festival is held every year, on the second day of the waxing fortnight of the moon in the month of Ashada, which corresponds to June-July.