Yama - The God of Death 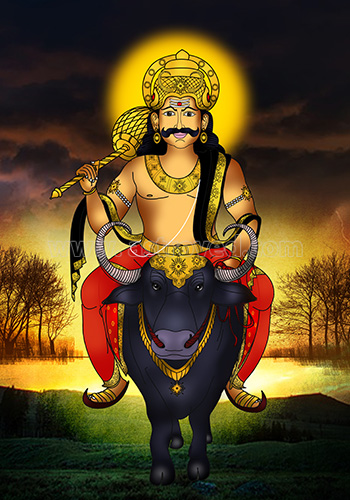 Lord Yamaraj is considered the Hindu God of death and resides in Kalichi, situated in the nether regions of the Patala Loka (netherworld). Even though Yama is feared by living beings, he plays a vital role in rejuvenation and maintaining the balance of the world through the continuous cycle of birth and death. He is considered the regent of the southern quarter and ably assisted by several attendants called ‘Yamaduttas’ in carrying out his tasks. Yama keeps a register in which each person’s span of life is meticulously recorded. This is called the ‘book of destiny’ and maintained by one of Yama’s attendants. When a person’s span of life runs out, Yama deputes one of his henchmen to bring the person to his abode. At times, Yama personally ascends to earth to bring a person down to his abode. The soul of the dead person is then made to appear before him, and he passes judgment according to the deeds one has carried out in the earthly plane.

He is also attributed to be the son of the Sun God (Surya) and Sanjana. Vedas describe him as the first man who died and he presides in the nether regions of the dead. He is also referred to as Dharma, due to his unwavering commitment to maintain order and harmony. He is portrayed as a teacher in the Katha Upanishad and is said to have incarnated as ‘Vidur’ the wise man during the Mahabharata period. Lord Yama also finds wide mention in Buddhist texts and is the subject of Chinese and Japanese folklore.

His able bookkeeper assistant Chitragupta, then reads out all the virtues and sins committed by the person in his/her lifetime; and accordingly, Lord Yamaraj decides the fate of the dead. The souls of sinners are sent to one of the many hells and the virtuous are sent to the abode of the Pitris, where they are re-united with their forefathers. Sometimes, the soul of a person is sent back to earth in a bid to accomplish more good deeds so that they may reconcile with their ancestors.

Many have tried to elude Yama by uttering the names of the three Gods who form the holy trinity of Hinduism; Brahma, Vishnu and Shiva. Unfortunately, not many are accomplished enough to achieve this distinction, but a few notable exceptions who escaped Yama’s noose do exist.

One story is that of a person who was unwilling to die and accept Yamaraj as his Lord. When Yama came to claim the man’s soul, he ran to a Shiva temple and clutching the Shiva Lingam in his hands, started reciting the Maha Mritunjaya Mantra of Lord Shiva. Lord Shiva was pleased with his devotion and personally appeared before him, where he confronted Yamaraj and ordered him to leave. When Yama refused, Shiva killed Yama and from then on, also came to be known as Maha Mritunjaya. Finally, upon hearing the entreaties of other Gods, Shiva relented and brought Yama back to life.

Another tale relates to a Brahmin by name of Ajamila, who lay dying and was saved from being claimed by Yamaraj. Ajamila had a son by name of Narayan (one of Lord Vishnu’s names), and he continuously called out to him to bring him some water. By doing so, he had inadvertently called out to Vishnu himself and thus Yama had no power to claim his soul.

Yama, the God of death plays a vital role in preserving the balance of life and death. He is depicted with dark green skin, wearing red robes and a glittering crown on his head. A buffalo serves as his mount and he constantly carries his mace and noose with him everywhere. His piercing coppery eyes miss nothing and he takes a keen interest in bringing the souls of the dead to face their fate.

When is Yama Venerated

It is said that the fourteenth day of the dark half of the Hindu month ‘Aswini’ is sacred to Yama and is thus called Yamatarpanam. The day is observed by lighting torches which are generally used to set alight the funeral pyre. This is said to facilitate the journey of the dead to the abode of Lord Yama and face the judgment day.