Lord Krishna - the 8th Avatar of Lord Vishnu, is regarded as The cosmic form of Lord Vishnu Himself and played a pivotal role in the Mahabharata as the charioteer and Arjuna's Guide in the Kurukshetra war. He is hailed as the progenitor of the Bhagavad Gita, which to this day, holds relevance because it elucidates the application of Vedanta to the daily affairs of life. The Lord manifested in human form to restore cosmic order in the universe, eradicate evil forces and reinstate dharma.

Krishna’s Idols generally portray him with blue or black skin and He is often depicted wearing a silk golden yellow dhoti and a peacock feather crown. He is shown as an infant, eating butter, a young boy playing flute and an handsome young man surrounded by women devotees. Hindu philosophical texts are rife with stories of Krishna and he is represented in a variety of perspectives and his feats are glorified as a prankster, a model lover, a divine hero, and as the Supreme Power. The Bhagavata Purana, the Mahabharata, the Harivamsa, and the Vishnu Purana are replete with stories of His good deeds on Earth.

Incarnations of the Deity

Lord Krishna descended on earth as the manifest form of Lord Vishnu Himself and is venerated as the 8th Avatar of the Lord. His incarnations are listed below as:

Matsya: Fish Form , To save Manu from the deluge

Kurma: A tortoise, used to churn the ocean for nectar

Vamana: A Stunted Form, Humbled Bali and granted him immortality

Kalki: Harbinger of the end of time 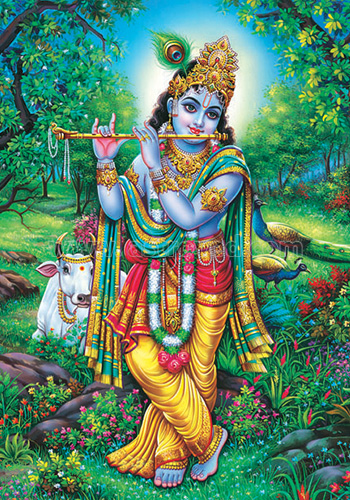 King Kansa, the tyrant ruler of Mathura was destined to be killed by the child of his sister Devaki. He thus Imprisoned Devaki and her husband Vasudeva. Because Kansa was uncertain which child would bring about his end, he brutally murdered all her children by smashing their heads. Then, Lord Vishnu Himself descended into the womb of Devaki and was born as Vasudeva or Krishna, the eighth child who was ordained to vanquish Kansa and restore peace and harmony in the world. Vasudeva managed to carry Krishna out of the prison and entrusted him with his kinsman Nanda, in exchange for his daughter. This infant daughter was Yogmaya who warned Kansa that his end was near before disappearing. Krishna spent his childhood years with his adopted parents Nanda and his wife Yashoda in Gokul. Balarama and Subhadra, two of Krishna’s siblings survived and were born to Vasudeva and his first wife Rohini. Stories of Krishna’s childhood are replete with deeds of his mischievous pranks and he is fabled to have won the hearts of the people of Gokul and Vrindavan with his playful antics. As a child, he possessed Supreme powers and killed innumerable demons who were born with curses or fate and helped them attain salvation. Krishna managed to spoil Kansa’s attempts to assassinate Him and eventually overthrew and killed him, thus fulfilling the prophecy and freeing the world from his evil deeds.

Devotees adorn Krishna’s Images with Tulsi garlands and milk products, especially butter (Krishna’s favorite food) . Fruits, laddus, cheedai and payasam are also dear to the Lord and after being sanctified by His blessings, are distributed to his devotees as Prasadam.

Worshipping Lord Krishna helps one achieve happiness and pleasure and those hankering for material benefits are blessed with His benevolence. It is said that prostrating at His Lotus Feet is said to deliver the worshipper from sins and ultimately attain Liberation (Moksha).

Santhana Gopala Fire Lab- This Fire Lab is targeted to bless you with a child, and protect expectant mothers against miscarriages and ensures safe delivery of the baby as well. 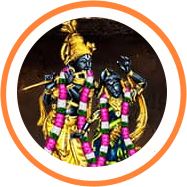 Krishna is the eight incarnation of Preserver God, Vishnu. He is well loved and revered God of the Hindu Pantheon.

Your life becomes easier when you captivate people around you. When you are magnetized with attraction, they yearn to help you and even go out of their way...