Vaitheeswaran Temple is dedicated to Lord Shiva, which is situated 7 kilometers from Sirkazhi. The word “Vaithiyam” denotes ‘curing,’ and the word “Eshwaran” denotes ‘Lord Shiva.’ Thus, Vaitheeswaran is the Lord who cures ailments and the God of good health. The main deities are Lord Shiva, worshipped as Vaitheeswaran, and Goddess Parvati worshipped as Thayalnayagi. It is one of the Navagraha temples dedicated to the Planet Mars, who is also known as Angaraka. Lord Muruga has a special place in this temple and is highly revered here. This is one of the famous temples, which was praised by Nayanmars, ardent devotees of Lord Shiva. Several saints and godmen had visited this temple, and it is prominent among the Shiva Temples.

History and Legend of Vaitheeswaran Temple 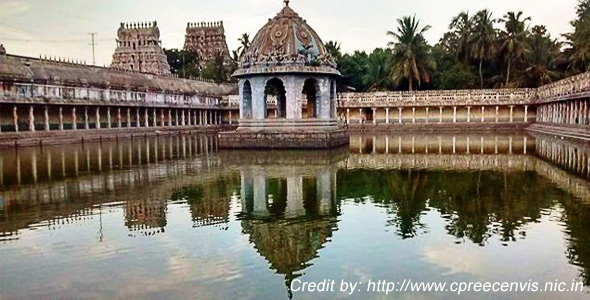 The name Vaitheeswaran was bestowed upon Lord Shiva, as he cured the leprosy of Angaraka, who found no cure elsewhere. This temple is also associated with the epic Ramayana, which states that Jatayu, the king of the birds, was given salvation in this temple. Even today, there is a special temple tank, and the sacred ash of Jatayu is kept for the public’s reverence. Another important feature is that Lord Muruga has only one face. Usually, he is always depicted with six faces. He received his weapon, ‘Vel’ from his mother, and annihilated the demon, ‘Surapadman.’ Lord Shiva cured the wounds of Lord Muruga, caused during his combat with the demon, Surapadman. Even today, a special medicinal ball, made of herbs and mud, is given as a medicine to cure many ailments.

This temple was built during the Chola reign, and many inscriptions say that these were later renovated during Nayaka’s period. This temple has separate shrines for Lord Shiva, revered as Vaitheeswaran, Goddess Parvati, revered as Thaiyal Nayagi, Lord Subramanya, revered as Chella Muthukumaraswamy and planet Mars, revered as Angaraka. Another important feature is that all the nine planets are aligned in a straight line, unlike their usual arrangement- three planets per row. The shrines of Lord Bhairava and Lord Sattanathar are depicted very nicely and are highly intricate. The temple corridor contains several pillars, which add beauty to this temple. Another important feature of this temple is that it allows the sun rays to fall directly on the Shiva Lingam, for a few days in a year. Currently, this temple is maintained by Dharmapuram Adheenam.

The 10-day festival in the Tamil month, Thai (mid-Jan to mid-Feb), is celebrated elaborately. The 28-day “Panguni Brahmotsavam” festival attracts people from all over the globe. The 6 days of “Aippasi Skanda Shasti” in October and November are also celebrated with pomp and glory. Vaikasi month’s Anna Abhishekam and monthly Krittika star days are also grandly celebrated at the temple. Angaraka’s (Mars Pooja) are conducted during Tuesdays, and he is ambulated in the corridors of the temple, and taken in procession along with the devotees. Along with that, festivals like Maha Shivaratri, Deepavali, Tamil New Year, etc., are all celebrated elaborately

The merciful Lord also promised cures for all the devotees who are suffering from diseases at this temple. The planet, Angaraka (Mars), protects the devotees from conflicts related to land or property. People with family feuds and problems in their life come to this temple to seek relief and ask the Almighty to guide them for a new life. Lord Shiva grants salvation to all his devotees and helps them to make positive strides in life. People who have Manglik Dosha (Mars affliction) in the horoscope visit the temple to get married soon.

How to reach Vaitheeswaran Temple

The nearest airport is in Tiruchirapalli, which is almost 118 km away from Vaitheeswaran Temple. Alternatively, Pondicherry airport is also at a distance of 108 km from the town.

Vaitheeswaran Temple has a railway station which is very close to the temple. It is well connected by railways, and most of the trains stop at this station.

Local transport connects to the temple. Buses, local autos, and taxis are available in large numbers, ensuring a seamless journey.