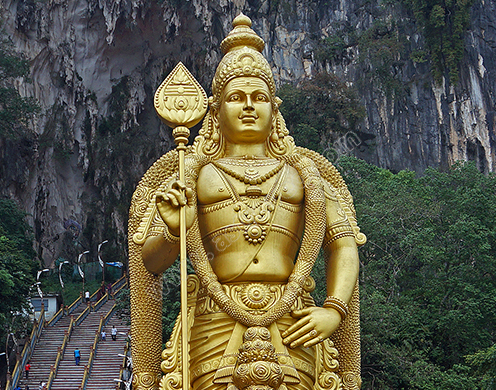 Muruga, also known as Subramanya, Karthikeya, Shanmuga or Skanda, is the son of Lord Shiva and his consort, Goddess Parvati. He is a unique Godhead, who is a rare combination of matchless valor and supreme, divine intelligence. He remains as the core of all the divine energies and is believed to lead one towards spiritual evolution. Muruga is regarded as a Tamil God and is widely worshipped all over the state.

Lord Muruga is usually depicted as a youthful god with a charming personality, dressed as a warrior and holding his weapon Vel (lance) in his hand. Sometimes, he is shown with six faces and 12 hands, carrying different weapons, which include sword, mace, javelin, discus, bow, etc. His mount peacock and a snake always accompany him. At times, he is also depicted along with his two consorts – Deivanai and Valli.

Vedic Astrology regards Mars as a fiery planet, on whom, the Vedic fire God Agni wields a strong influence. Being the ruler of the highly potent Mars, Muruga is held high in Vedic Astrology as well, as the divine personification of supreme power, consciousness, and wisdom, who can free one from karmic bondage.

Skanda Purana, the religious text about the life of the lord, gives a good account of the interesting legend on the birth of Muruga and his exploits.

The advent of Muruga became necessary for saving the universe from the atrocities of the mighty demon, Surapadma, who obtained many boons, became quite powerful and started oppressing even the Gods. The compassionate Lord Shiva opened his third eye, and a blazing flame emerged out of it. The divine forces carried this to the sacred pond, Saravana Poigai, where, the flame transformed into six sparks and six handsome babies emerged out of them. These six divine babies were well taken care of by six angels known as Karthigai Pengal (damsels), who were the personifications of the powerful star Krittika. As Goddess Parvati very fondly hugged the six young ones together, they all merged into a single form, with six heads. Pleased with the service of the angels, the divine couple Shiva and Parvati, named the baby as Karthikeya. Vaikasi Visakam that is, the day of Visaka star in the Tamil month of Vaikasi (mid-May to mid-June) is considered the day of the Lord’s incarnation, while all the Krittika star days are held sacred for Muruga worship.

Then Muruga set out on his mission of ridding the universe of evil forces. Armed with the mighty Vel (lance), presented to him by his mother Parvati, Muruga led an army of celestial beings against the demon army and fought Surapadma, his henchmen, and their mighty forces. The fierce battle ended on the 6th day, when Lord Muruga comprehensively defeated Surapadma and his evil forces, relieving the Gods and the people, of his repression. This Shasti day, that is, the 6th day of the waxing moon is observed as Skanda Shasti, in the Tamil month of Aippasi (mid-October to mid-November). The grateful devotees remember the heroic feat of Muruga, sing his glory for the first five days, and on the 6th Skanda Sashti day, they undertake Vrat or fasting and offer him special worship to commemorate his resounding victory. This triumph is also enacted in many Muruga temples with enthusiasm as ‘Soorasamharam,’ the annihilation of Surapadma.

But the merciful Lord, didn’t actually kill Surapadma, but only destroyed the evil in him, and accepted the chastised demon as his devotee. In the last phase of the battle, Surapadma realized that his opponent was none other than the invincible Muruga, and began changing himself into different forms, using his illusory powers. But these were of no avail. Ultimately he became a big mango tree, which Muruga split into two, with his Vel. As a very last effort, the demon converted himself into a peacock and rooster, from the two tree pieces. Muruga not only tamed both in no time but also showed his compassion by accepting the peacock as his vehicle and transformed the rooster into his flag’s symbol.

The legend of Muruga illustrates the great truth that anyone repenting sincerely for his or her sins and praying for redemption would receive divine pardon and blessings.

While Muruga worship is done extensively all over Tamil Nadu and also beyond and there are many temples dedicated to the Lord, six of them are considered especially significant and holy. These are believed to be connected to the various important anecdotes of his life and are referred to commonly as Aru Padai Veedu, the six abodes of the Lord.

Of these, Pazhani hill temple is the place where young Muruga began residing after his tiff with his family over a mango fruit; Swamimalai is the location where Muruga became a teacher to his father Shiva and explained to him the essence of Pranava Mantra – ‘Om’; Thiruchendur, the seashore temple is where he vanquished the demon, Surapadma; Thirupparankundram, is the place where he married Indra’s daughter, Deivanai; Tiruttani is where he relaxed after the great battle, and also married Valli; and Pazhamudhirsolai, is the hill where he settled with both his consorts and is blessing his devotees.

Muruga is a master of many great qualities and divine attributes. His worship shall help the devotees overcome the three prime impediments of Karma (destiny), Maya (illusion) and Ahankar (ego). They would also be blessed with courage, confidence, determination, knowledge, skills, intelligence, and wisdom. Muruga is also the overlord of the warrior planet Mars and worshiping him shall help people to get relief from the malefic effects of the fiery planet. Planet Mars is also known for causing legal issues, and people in particular, who are entangled in litigations should worship Lord Muruga, for coming out of these successfully. Performing Poojas and Homas to Lord Muruga shall prove immensely beneficial for achieving their ends.

Muruga’s vel is also a psychic weapon, which can destroy karmic bonds, darkness, and disease, while his rooster has the power to destroy evil and negativity.

People offer prayers to the Lord at home and also in temples, which include Poojas, Abishekams (hydration Pooja) and Alankarams (decorations). Devotees also carry milk pots, kavadis (decorative arch), etc. to his temples on special occasions, while some pierce their faces, tongues, and body with Vels (lances) and go on padha yatra (cover the entire distance by foot) to his abodes. Many sing hymns like Skanda Shasti Kavacham in his praise, while some undertake fasting.

Sashti, the waxing moon phase day and the Krittika star day every month, are regarded as most auspicious for propitiating Lord Muruga. Many observe vrats (fasting) especially on these days, for receiving the blessings of Muruga for the fulfillment of their desires.

Apart from Vaikasi Visakam and Skanda Shasti, many other important days and festivals are also regarded as significant for Muruga worship. Thai Kirthigai and Thai Poosam, the days of the star Krittika and Poosam in the Thai month (mid-January to mid-February); Aadi Kirthigai, the Krittika star day during Aadi month (mid-July to mid-August) and Panguni Uttiram, the Uttiram star day in Panguni month (mid-March to mid-April) are considered propitious for Muruga worship.

Muruga Pooja is dedicated to Lord Muruga, the son of Lord Shiva and the God of victory. The purpose of this pooja is to achieve success in all litigation issues and to attain a problem free life!

To get rid of litigation and other legal issues, pray to Lord Muruga/ Subramanya. This powerful Archetype also helps to overcome debts, diseases and problems from enemies.