Lord Bhairava is venerated as a manifestation of Lord Shiva Himself and is associated with destruction or annihilation. Revered by Hindus and Jains, He is worshipped widely in India and Nepal with great fervor and devotion. Bhairava represents 64 forms grouped under 8 categories called Astanga Bhairavas controlling the 8 directions of the manifest world. The Bhairavas are controlled by Kala Bhairava, the Supreme ruler of time of The Universe. Bhairava is considered the protector of the timid and weak especially women and His Idols are installed in most Hindu Temples.

Bhairava Idols are generally situated in the north facing, southern facing direction in all Shiva Temples. As Ksetrapala (guardian of the temple), He is depicted in a standing position with four hands wielding his weapons, drum, pasa (noose) trident and skull. Certain forms portray Him unclothed with four hands, protruding teeth, with a garland of red flowers and a frightening demeanor. His vehicle (vahana) and companion is a dog who is always shown beside Him.. The form called Svarṇākarṣṇa Bhairava depicts Him with a red complexion and clothed in golden dress, with a moon on his head and four hands, with one hand carrying a golden vessel. He is also portrayed with twisted serpents slithering over Him attired in a tiger skin and an apron composed of human bones.

There are eight manifestations of Lord Bhairava (Ashta Bhairava) whose attributes are mentioned below:

Krodha Bhairava: Endows one with power to make potential and crucial decisions in life

Kapala Bhairava: Helps rid one of all unproductive works and actions

Samhaara Bhairava: Wipes out bad consequences of past actions

According to The Shiva Mahapuranam, Kala Bhairava emanated from the fingernail of Lord Shiva, which he directed toward Lord Brahma to cut off one of His heads when Brahma began to interfere in what Shiva was doing. Thus, the skull of Lord Brahma 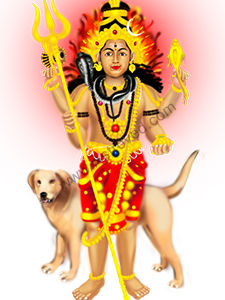 is depicted as being held in the hands of Kala Bhairava who destroyed Brahma’s ego and enlightened Him. Lord Shiva as Kala Bhairava is said to guard the Shaktipeethas with each Shaktipeetha temple accompanied by a temple dedicated to Bhairava. Also known as Bhairavar or Vairavar in Tamil, He is often portrayed as a village guardian (Grama Devata) whose power extends in eight directions (ettu tikku).

Regular Puja rituals in Shiva Temples begin with Surya and end with Bhairava. Offerings to Bhairava Include Ghee Hydration (Abhiṣeka), Red flowers, Ghee lamp, unbroken coconuts, honey, boiled food, fibrous fruits etc. Eight types of flowers and leaves are used in offering Archana to Bhairava and His consort Bhairavi. Feeding dogs is also another way to invoke the blessings of Kala Bhairava and offering prayers at midnight, especially on Fridays and Tuesday is said to bring about quick results.

Worshiping Kala Bhairava dispels darkness from our lives and subdues our enemies. He protects His devotees from greed, lust and anger and helps them overcome addictions of all kinds. Devotees can get relief from sufferings and sins by performing Kala Bhairava homa on auspicious days. Also, invoking His blessings before embarking on journeys ensures safe travel. Managing our time properly is said to please Him immensely and he endows those who utilize their time constructively to effectively make use of all the opportunities that come their way.

Lord Kala Bhairava, the manifestation of Lord Shiva is the chief deity of this powerful Homa.