Angaraka, Planet Mars is the 4th planet from the Sun. It is red in color and a fiery planet. Its energy is masculine. Tuesday is his day and he governs the zodiac signs Aries and Scorpio and rules the stars Mrigashira, Chitra and Dhanishtha. The transitory time of planet Mars from one sign to the other is generally 45 days. However, this is unpredictable as sometimes Mars stays stable in a zodiac sign even for 6 months. The presiding deity of the planet is Lord Muruga.

Mars is a forceful planet and symbolizes desire, rash boldness, adventures, physical strength, primitive tendencies, self-dependency, power to withstand strain, independent nature, desire for position, warrior energy as it is the commander of the divine army, drive and courage. It also denotes matters pertaining to one’s siblings. Mars energy can be both constructive and destructive and one needs to be very watchful.

Angaraka is portrayed with four hands, carrying a trident, mace, lotus and a spear. Wearing red clothes, he often rides on a ram/goat. 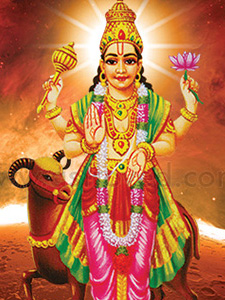 The masculine energy of Mars shows the projection of our vital energy and emotion, and it indicates our passion, motivation, and determination. A strong Mars will indicate these qualities of vitality, power, endurance, drive, courage etc. Also when Mars is well placed, it provides confidence, strong will power, insight and discrimination. However an ill placed Mars can cause violence, control, domination, or injury, accident, anger, war, criticism, delayed marriages, relationship struggles etc.

The day of the week for the Mars is Tuesday, the precious gem is coral, and the most significant flowers are the Red oleander, Red rose. Thuvar Dhal is the grain for the Mars. As the color of Mars is red, he is always draped in red color cloth.

The power spot of Mars is Vaitheeswaran koil, down south of Tamil Nadu. Worshipping Mars on Tuesday and its presiding deity Lord Muruga will remove any afflictions caused by the improper placement of planet Mars. 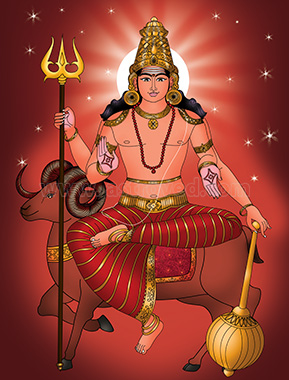 Participate in Mars Pooja to improve your courage and ability to take risks.

Participate in Mars Fire Lab to control your mind and emotion.

Keep Mars yantra with you to improve courage and ability to take risks.