Goddess Abirami Temple is located in the town of Thirukkadaiyur. Lord Shiva is worshipped as Amirthagateswarar, and his consort is Goddess Abirami. Lord Shiva is manifested as the Destroyer of Death, who blessed his devotee Markandeya from the clutches of Lord Yama, the God of death. Couples celebrating 60th or 80th marriage anniversary celebrations would perform their celebrations here in this temple. This is called “Padal Petra Stalam”, where the temple had been praised, and couplets are written in the holy book of Tevaram. 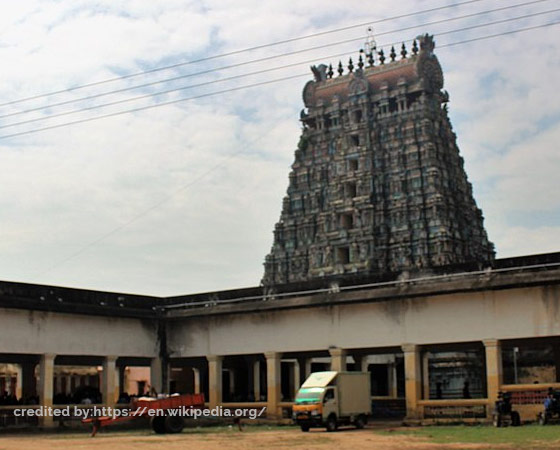 The pot is called Gatam in Tamil, and the town derives its name from the word Gatam. Once the ocean of milk was churned and the nectar of immortality was obtained. This was kept in the earthen pot and brought to this place. The Devas, without offering it to Lord Ganesha, consumed the nectar themselves. Ganesha was raged and stole the pot. He created a Shiva Linga and poured the nectar over it. Since then Lord Shiva was called “Amrita Ghat Eshwarar”, translating to the Lord who leads to immortality. Lord Abirami is believed to have incarnated by the power of Lord Vishnu in this shrine.

Once there lived a Sage called Mrikandu and his wife Marudmati. They were childless for a long time and performed severe austerities towards Lord Shiva. Pleased by their devotion Lord offered them to choose between a child who can have a good life but dull headed, or sparkle minded by with short life span of 16 years. The couple after musing for a long time decided to have an intelligent child. Thus the child was named Markandeya. The child grew with a lot of piety towards Lord Shiva, and when the time had reached to attain mortality, he embraced the Linga in this shrine. When Yama, the god of death, threw the noose, Lord Shiva became furious and kicked Yama. He also blessed Markandeya with the boon of immortality. Thus Shiva was called “Kala-Samhara" the destroyer of time.

Once a sage called Abirami Pattar, wrongly told the king that the moon will rise on a new moon day. The sage understood his slip and pleaded Goddess Abirami to help him. To help her devotee, she threw her ear ornament which is so luminous like the moon, where the people mistook it as the moon. Thus people understood the devotion of Abirami Pattar towards the Goddess and asked to pardon them for their mistake.

The temple is built in the Dravidian style of architecture, built by Chola Kings. The temple was later patronized by Nayaka Kings. The temple is built in ten acres and has two Gopurams or the temple tower. The Rajagopuram is located on the eastern side and is of 11 stories, at a height of 46 meters. The sanctum sanctorum of Lord hoses a Shiva Linga. There are three water bodies in the temple complex, namely 'Amrita Pushkarini', 'Kaala Theertham', and 'Maarkandeya Theertham. There are separate shrines for Goddess Abirami, Lord Amirthagateswarar, and Sage Markandeya worshipping Lord Shiva.

Since the Sage Markandeya was rescued by Lord Shiva himself, the devotees may overcome the fear of death. she helps her devotees to overcome all challenges. Especially between the married couples, the love and bonding enhance by the grace of the Goddess.

How to reach Thirukkadaiyur Abirami Temple

The nearest airport is in Trichy, which is almost 145 kilometers from the shrine.

The nearest station is in Mayiladuthurai, which is almost 37 kilometers from the shrine.

Being one of the prominent pilgrim centers it is connected by a lot of buses and has other modes of transportation like autos, cabs, and taxis.