Introduction about the Sabarimala Temple

The Sabarimala Temple is a revered and popular Hindu religious center located in the coastal South Indian state of Kerala. The temple is situated on a hill in the western Ghat mountain ranges of Pathanamthitta District, in the midst of the Periyar Tiger Reserve. Several temples exist in the hills surrounding Sabarimala, with some of them still functional and many just remnants of old temples which have survived to this day. 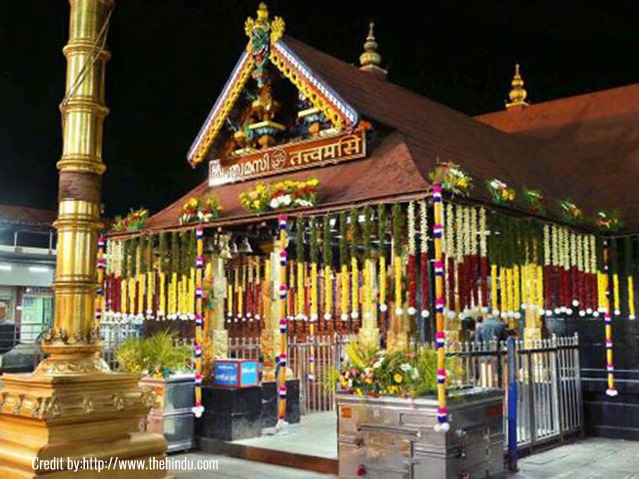 The Sabarimala temple is dedicated to Lord Ayyappa , who is considered a united form of the two mighty celestial deities Lord Vishnu and Lord Shiva. Lord Ayyappa serves as the symbol of Shaivism and Vaishnavism forming a powerful union to propagate the edicts of both sects. Some regard Lord Ayyappa as a form of Lord Buddha as Dharma Shasta, but there is no corroborative evidence to back up this theory. The shrine witnesses one of the largest annual pilgrimages on the planet, with over 100 hundred million devotees visiting every year.

History of the Sabarimala Temple

The origins of this ancient temple are steeped in the mists of time, with many legends abounding about its inception. The worship of the Sastha was prevalent in South India in ancient times and it said that the prince of Pandalam Dynasty, who is considered an Avatar of Lord Ayyappa, visited the area to meditate. This area is now called Manimandapam and forms an important integral part of the present day temple.

Many temples of Sastha exist in India and also across the Globe and the one at Sabarimala is regarded as one of the five Sastha temples founded by Lord Parasuram. Access to the temple was very difficult for a long period of time, but in the 12th century, a Tamil king called Rajasekhara Pandian rediscovered the original path leading to Sabarimala. When the kingdom of Pandalam was added to Travancore in 1821, the Sabarimala temple along with several other shrines was added to Travancore. The Idol of the present day temple was installed in 1910.

Significance and Rituals of the Sabarimala Temple

Pilgrims to Sabarimala observe several forms of worship, which include Shaivite, Vaishnav and Shaktist customs. Though the pilgrimage is undertaken mainly by Hindus, everyone is welcome to undertake the pilgrimage irrespective of caste, creed, religion or color. Pilgrims are required to fast for 40 days and observe celibacy during this period, while also performing daily prayer rituals. They should also observe complete abstinence from worldly affairs during this period.

Pilgrims are easily identifiable by their black or blue dress. They also do not shave until after their return from the pilgrimage and anoint their forehead with Vibhuti or sandal paste. They also greet other as ‘Swami’ and chant ‘Swamiye Sharanam Ayyappa’ when they visit the temple. Strict penance, fasting and continence are observed by pilgrims, while shunning tobacco and meat is also mandatory. They also wear the Rudraksha Mala (chain) as a form of reverence and to indicate their status as pilgrims.

Entry of women in the 10-50 age group is strictly prohibited, but the matter is debatable and currently under consideration by the judiciary of India.

The 18 sacred steps (Pathinettu thripadikal) leading to the temple can be ascended only by those carrying "Irumudikkettu” and there is a separate stairway for those not carrying "Irumudikkettu”. Before ascending to the temple of Lord Ayyppa, one should pay obeisance to Vavur Swami and Kadutha Swami at the foot of the steps. They should also take a dip in the sacred River Pamba, which is said to wash away one’s sins.

Pilgrims carry packs containing offerings like coconut, ghee, camphor and rice on their heads. As a mark of respect, coconuts are broken at the foot of the steps before going forward and ascending to the temple to get a glimpse of the Lord.

Architecture of the Sabarimala Temple

This ancient temple is nestled in the midst of 18 hills at an altitude of 4133 feet above sea level and surrounded by Mountains and dense forests. The magnificent dome of the shrine is covered with gold and the Sannidhanam (main temple) is built on a 40 foot high plateau. The shrine was rebuilt in 1950 after a fire gutted the premises and the stone image of the deity was replaced by a Panchaloha idol made from an alloy of five metals. The Sanctum Sanctorum is topped by a copper plated roof and the flagstaff was installed in 1969. There is a shrine dedicated to Sri Ganapathi within the premises and devotees break coconuts in front of the shrine as a mark of respect to the deity. A shrine of the Snake God is also located adjacent to the main temple and devotees offer prayers here as well.

The Ayyappa temple in Sabarimala observes an annual festival celebrated from the month of November to mid-January. Mandal Puja and Makar Sankranti Puja are the two main occasions when the temple is visited by the maximum number of people. Worship is offered at the shrine during the Mandalapooja period which starts on November 15th and ends on 26th December, then again on 14th January during Makaravilakku or "Makara Sankranti" and on 14th April during and Maha Vishuva Sankranti. The Makara Vilakku is truly a sight to behold from the Sabarimala hills, when one gets to view the ‘Holy Light’, indicating the presence of a divine entity.

Benefits or Blessings of the primary deity- Sabarimala Temple

Going for the Sabarimala pilgrimage is said to be an enlightening experience and many undertake the trip every year and sometimes even twice a year or more. This practice is continued for several years or maybe even for the lifetime of the person. Many wish for monetary and other worldly benefits, but the true purpose of this sublime pilgrimage is to realize the nature of the true self, which lies hidden deep within one’s spiritual nature. Consciousness and awareness in the mental and physical state is what Lord Ayyappa advocates and those aspiring for these characteristics are blessed by the Lord.

Location – How to reach the Sabarimala Temple

The Sabarimala Ayyappa temple lies in the hills on the eastern part of Kerala, bordering Tamil Nadu. Pamba is located at the foothills and one has to undertake the journey of 5 km by foot after that.

By Air: The nearest Airport is located is in Cochin or Kochi, which is about 160 km away. Thiruvanavthapuram International Airport is around 170 km away.

By Train: Several Railway Stations in Kerala are located close to the temple, but the nearest is Chengannur, about 82 km away.

By Bus: Several buses ply to Pamba from the main cities.

Local Transport: Taxis and buses are available to take one to Pamba.

By Helicopter: There is a Heliport in Perunad, about 40 km away from Pamba.