Chidambaram Nataraja Temple is a prominent Shiva temple in South India. The word ‘chit’ means wisdom and ‘ambaram’ means ‘broad open space not measurable’. Thus, Chidambaram denotes a broad open space without an end. This is situated around 78 kilometers from Pondicherry, situated on the banks of the Cauvery. Lord Nataraja is the supreme manifestation of Lord Shiva, revered as the king of dancers.

The temple is also an example of the unity between Lord Shiva and Lord Vishnu. At one particular spot, both the deities can be worshipped. This temple is highly revered by Tamil Saints and Nayanmars and is the prime reason for the thriving of Saivism in Tamilnadu. There is a special Sri Chakra, which was installed by Saint Adi Sankara in the Ambika shrine. The presiding deity is Thirumoolanathar but Lord Nataraja takes prominence here. It is one of the Panchabootha Sthalams where he manifests the sky.

History and Legend of Nataraja Temple 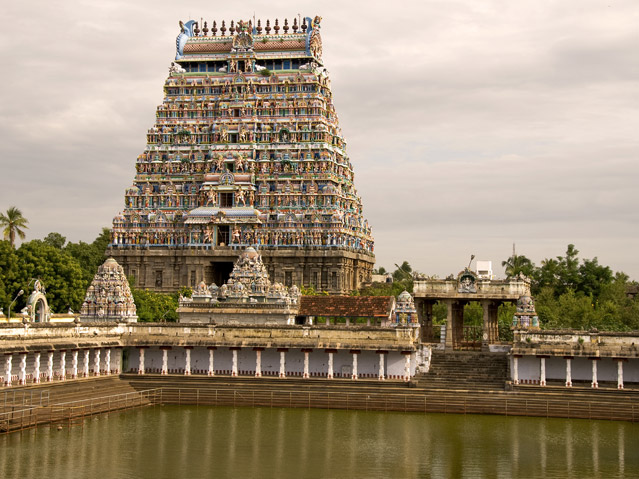 Once there lived an ardent devotee named Nadanar, born in a low caste. In those days, people belonging to certain castes were restricted from entering temples. When he reached the temple, the Bull or the Nandi, the vehicle of Lord Shiva, was blocking the way. Lord Shiva himself asked Nandi to move a few inches so that he could give darshan to his devotee. He also gave salvation to Nadanar. Another history says that Saint Manickavasagar cured the dumb daughter of the Buddhist king of Srilanka with the blessings of Lord in the temple.

There are other histories about this temple, where Sage Vashishta advised a young lad to worship Lord Shiva to gain salvation. As the young lad tried to collect flowers, he was unable to collect them in the dense forest. Lord Shiva appeared before him and gave him hands and legs like that of a tiger. From then on, the young lad was called Vyakrapadar.

This temple was built during the Chola Dynasty and spans about 51 acres. Most of the temples at Chidambaram were built in the 12th and 13th centuries CE. This temple has separate shrines for Lord Shiva, Goddess Parvati, Lord Vishnu and Lord Brahma. The temple has beautiful Gopurams and carvings. The special gold-plated Vimana, on top of Lord Nataraja’s shrine, is a splendid specimen of architecture. The eastern gopuram has 108 reliefs which are depicted in the Natya Shastra. Pancha Sabai denotes the five dancing halls of Lord Nataraja. Chidambaram temple has “Kanaga Sabai” which means ‘hall made of gold’.

The temple tank is a fresh source of water with which the Abhishekam on Lord Shiva is performed. “Chidambara Ragasyam” denotes an empty space. There is a small Vilwa garland hung without a Murthi. This denotes that God is beyond a beginning and an end.

Abhishekam is a special hydrating ceremony performed on the Lord’s idols by pouring many sacred substances like rose water, turmeric and water to appease the Lord. This is performed during all festival days. The dance festival “Natyanjali”, is celebrated once a year, when all the dancers gather to perform their tribute to Lord Shiva. “Shiva Ratri” is a major festival; other important festivals are Arudra Darshan, Thiruvadarai and Nataraja Abhishekam. Natyanjali is also a prominent celebration. So is the car festival in Chidambaram.

Lord Nataraja bestows peace on his devotees. Since Lord Nataraja is the King of Dance, many people pray to him for excellence in their pursuits of dance, music or other art forms. Lord Siva showers his mystical grace and enhances the positive aura of all his devotees. Many people have felt a transcendent effect, post their visit to this temple.

As the positive vibrations of Lord Shiva enter the mind, it gives an enriching experience, if a person is seeking spiritual upliftment. Soul-fulfilling experience and composure are what one can achieve through the worship of Lord Shiva in this temple. People with special requests for job, peace in their family and strong marital relationships are also fulfilled by worshipping in this temple.

How to reach Nataraja Temple

The best way to reach is from Pondicherry airport, which is 51 kilometers away from Chidambaram city. It is nationally and internationally connected. There are numerous modes of local transport from the airport.

Chidambaram city is well connected to various parts of Tamil Nadu. Chidambaram has its own railway station, very much near the temple.

There is a bus stop very near the temple. Apart from buses, there are numerous options like autos and taxis which can take one very close to the temple.