Tali Temple is the most ancient temple located in the coastal town of Kozhikode in Kerala state. This is a Shiva temple. But, still this remains unique as the Lord is worshipped here as Uma Maheshwara, a combined form of Shiva and his consort, Goddess Uma or Parvathi.

Legend and History of the Temple 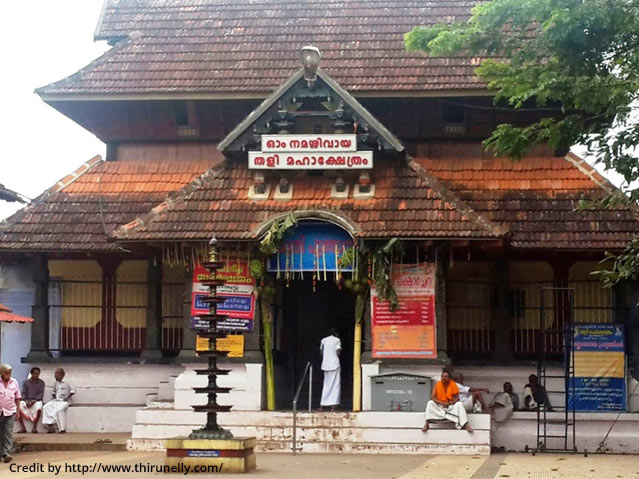 The temple is said to have been built in the 14th century AD. However, as per a legend, this belongs to the hoary Dwapara Yuga and was built by none than Lord Parashurama , who is an incarnation of Lord Vishnu . While another theory regards this as being around 400 years old, the temple as such, in some form, is believed to have existed from much earlier times and even before the town itself evolved. This used to be a simple structure, which was looked after by about 50 Kerala Namboodhri families. It is also alleged that the Zamorins, the Hindu Eradi rulers of Kozhikode killed the Namboodhris and took control of the temple and under them, the temple began gaining prominence about 15 centuries ago. At that time, the God here was called Sailabdheswara, the Lord of the mountain and the sea. Later, the temple is said to have been shifted to a location within the palace itself, while it got reshaped to its present form subsequently. It is the descendants of the royal family who still manage the affairs of the temple.

Structure of Tali Temple and its Worship

Tali temple is important not only from the religious and historical points of view, but also from the architectural angle. Located in a serene environment, this temple remains as an exquisite blend of laterite (stone) and wood, and is also generously decorated with brass.

Surrounded on all sides by big compound walls that look like the belly of an elephant, the temple can be said to have a few important aspects. There are big towers at the entrances that look appealing with their delicate sculptures and carvings. Inside, there is a majestic Dwajasthambam, the flag post, that is believed to be linking the heaven to the earth. The large flag staff platform is known as Anakottil and is meant for the elephants. There are also the Deepasthambams, the pillars where traditional lamps are lighted. The various shrines inside form the Sivakshetram, Nalambalam and Krishnakshetram. The temple structure houses the main sanctum in the middle.

It is in the form of a chariot, two storied and is well embellished with mural paintings. Lord Shiva is in the Lingam form here and is considered to be one among the Jyothir Lingams. The inner circumambulatory passage contains the images of Uma Maheshwara, Tali Ganapathi, Thevarathil Ganapathy and Thrumandhakunnu Bhagavathy, while the outer one houses the deities, Lord Ayyappa , Thevarathil Bhagavathy and Lord Naga. Lord Vishnu is also there in a separate shrine, which has its own flag staff and this shrine also contains the idol of Sreevalayanad Bhagavati. The small temple of Narasimha Moorthy is also there to the south of the Vishnu temple. There is Eranjipuram in the northern portion of the temple and it looks very good and bright, well lit from all sides.

Tali temple has also remained as the centre for scholarly pursuits. The seven-day cultural festival of Revathi Pattathanam originated only here, which attracted erudite scholars and eminent philosophers in the olden times. Scriptures, philosophical treatise and grammatical works like Bharatha Meemamsa, Prabhakara Meemamsa, Vedanta Meemamsa and Vyakarana were debated seriously here, while as many as 18 well known poets are also said to have contributed to the discussions during the 15th and the 16th centuries. It is a matter of pride that this special event is taking place here, even in the present times, during the month of October or November. The ambience of the temple is such that it naturally evokes great reverence in our hearts and tune our minds to devotion and prayer.

Ceremonial worships and traditional poojas are conducted in the temple from early morning to night, in which people in large numbers participate. Many festivals are also celebrated here, of which Vishu, the Malayalam New Year is observed with great enthusiasm. As in any Kerala temple, devotees will have to come here only in traditional dress, while men are required not to wear anything in the upper portion of their body.

How to reach Tali Temple?

The temple is located right in the middle of the Kozhikode town, which is well connected by air (Calicut International Airport), rail and road with all parts of Kerala and also with many important towns and cities. This is about 378 kms from the state capital, Thiruvananthapuram, 184 kms from Kochi, 191 kms from Coimbatore, 232 kms from Mangalore and 359 kms from Bangalore.