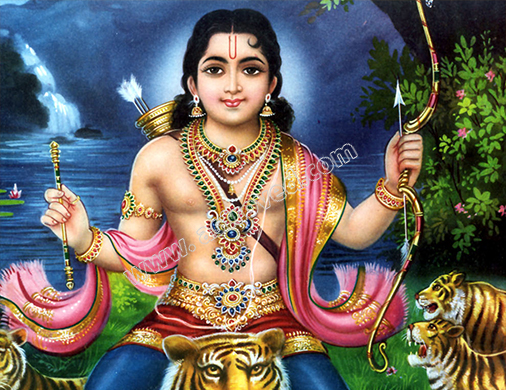 Ayyappa is a very popular God, who is worshipped fervently all over India, especially in the South and particularly in the state of Kerala. Also known as Sastha, Dharmasastha, Hariharan, etc., he has a unique origin, believed to be born out of the spiritual union of Lords Shiva and Vishnu. He is a powerful deity, and his blessings are considered particularly effective in reducing the ill effects of planet Saturn.

Lord Ayyappa is usually depicted as a handsome, celibate god seated in a yogic posture with legs crossed and tied with a band and wearing a bell around his neck. Celebrated as a warrior deity, he is also shown riding a tiger. In other cases, he carries a bow and arrow in his left hand and holds a bow or a sword in his right hand.

A Sabarimala pilgrimage is steeped in its own traditions and rituals, of which Irumudi remains an important part. Irumudi is a cloth bundle of 2 compartments that is carried on the head by the devotees as the travel kit and usually is in the colors of black, dark blue or saffron. The front portion contains the Pooja articles and the sacred offerings to be made to the deity, like ghee-filled coconut, raw rice, jaggery or cane sugar, betel leaves, camphor, etc., while the personal belongings of the devotee are carried rear in the compartment.

The ghee coconut can be considered the most important part of the Irumudi. Known as Mudra Thenga, it is an insignia. It is a coconut whose outside is cleaned thoroughly, and the inside is emptied by draining out the sweet water through the eye of the coconut. Then the coconut is filled with pure ghee, which is used later for the Abishekam (hydration ceremony) of the Lord, at the time of worship. The opening of the ghee coconut is then sealed. The ghee coconut represents the act of emptying oneself of the worldly pleasures first and then filling the void with pure life force. Bathing the Lord with the ghee amounts to merging one’s consciousness with the divine.

Pathinettaampadi in the temple and passing through it is an important and inseparable part of the pilgrimage. These Pathinettaampadi or the eighteen divine steps lead the devotees to the sanctum sanctorum of the Lord, which they start ascending by placing their right foot on the first step. Only those carrying Irumudi on their heads after observing the 41-day austerities can set foot on these steps, as per tradition.

The first five of these steps represent the five senses - vision, hearing, smell, taste, and touch; the next eight signifies the ashta ragas - the eight important human failings such as desire, anger, greed, lust, pride, unhealthy competition, jealousy, and boastfulness; the next three represent the three Gunas or qualities - sattva (clarity), rajas, (activity) and tamas (inertia); and the last two steps denote the twins of knowledge and ignorance. It is believed that only after climbing these steps and going beyond all that they represent, one can detach the self from all worldly bonding and attain a state where one can align with the supreme.

Legends speak elaborately about the birth and life of Lord Ayyappa. There was once a female demon called Mahishi. She did severe penance and got from Lord Brahma the extraordinary boon that she can be killed only by someone who is born to Lords Shiva and Vishnu. As two males together, cannot produce an offspring, she began taking herself to be indestructible and started committing various atrocities. Somewhere else, Bhasmasura, another demon managed to obtain a deadly boon from Shiva to the effect that any person on whose head he places his hand, would turn into ashes the next moment. But no sooner he got the boon he wanted to test its efficacy on the Lord himself. Realizing the implication, Shiva rushed to Lord Vishnu and sought his help. The God of protection assumed the form of Mohini, a bewitching beauty and stood before the demon, who was in hot pursuit of the boon-giver. Smitten by Mohini’s charm, the demon fell for her guiles, began acting as she wanted and ultimately ended up placing his hand on his own head. And true to the boon, he burnt himself to ashes. The relieved Shiva himself then felt deeply impressed with the damsel’s charm, and the spiritual union of the two great Gods happened for the good of the world. The divine child Ayyappa was born to them, bearing the name Hariharan (Hari is Vishnu and Haran is Shiva), with his Nakshatra or birth star being Uttaram or Uttara Phalguni. This child was later found by king Raja Rajashekara Pandiyan of Pandalam and was brought up as the childless king’s own son. As there was a bead tied around the neck of the child, the king named the boy Manikantan, the one who has a bead in the neck.

Later a son was born to the king himself, but still considering only Manikantan as his elder son, the king started making arrangements for declaring him the crown prince. However, the queen had other ideas and wanted her son to ascend the throne after the king. She hatched a conspiracy to get rid of Manikantan and pretending to suffer from severe head ache, and she made the physician to prescribe the milk of tigress as its only cure. While none came forward to undertake this dangerous mission, Manikantan, on his own accord, ventured into the jungles, perhaps to fulfill the purpose of his advent on earth.

He encountered the female demon Mahishi in the forest, fought a fierce battle with her and destroyed her. But it was actually a blessing in disguise for the demon, as, in the process, she assumed her original form of a beautiful woman and is now worshipped in the Sabarimala temple of Ayyappa. Supremely pleased with the annihilation of the feared Mahishi, the Devas assumed the forms of tigers, riding on whom, Manikantan returned to the palace. Realizing the divinity and greatness of the young lad, the king and the others bowed to him with great respect.

With his divine mission completed, he took his abode at Sabarimala Mountain in the Pathanamthitta hill forests, to the north of Pampa River, in the present Kerala state. The king built the temple as desired by the lord and advised by sage Agastya, in which, the idol of the lord as Ayyappa was consecrated by Parashurama, on the first day of the Malayalam month Makaram (which falls in the middle of January). Lord Ayyappa can be worshipped in the sanctum, seated cross-legged assuming a divine yogic posture.

Ayyappa worship, along with the austerities observed, is believed to bestow immense benefits on many fronts to the individuals and their entire families. It would fulfill all the honest desires of the devotees and bestow good health, prosperity, and success. The lord is also well known for his special powers to control the malefic effects of Shani (planet Saturn). His worship can help to minimize or remove the hardships caused by the unfavorable placement of the planet, indicated by trying times such as Sade Sati (seven and a half year period of Saturn), Saturn in 8th house of birth chart, Saturn affliction, etc.

People in huge numbers from all over the country and even outside, keep visiting the Sabarimala temple after observing various strict austerities with intense devotion for weeks together, as laid down by the Lord himself and worship Ayyappa. Millions undertake the arduous pilgrimage with faith, trekking through mountainous forests and covering long distances on foot, especially during the consecutive months of Karthigai and Margazhi (Mid November – Mid January). This special period of the sacred Ayyappa worship concludes with the sighting of Makara Jyothi, a flash of light as stars that appears around sunset time at a distant horizon, on the holy Makara Sankaranti day, (generally on the 14th or 15th of January). As Ayyappa is a celibate, young and middle-aged menstruating women, do not undertake Sabarimala pilgrimage.

Apart from the popular and extremely crowded November-January period, there are other important times too, for undertaking Ayyappa worship at Sabarimala. These include Panguni Uttiram, the day of Uttiram star falling in Panguni month (March-April); Chitra Vishu, the first day of the Vedic New Year (mid-April); and Tula Vishu, the first day of the Malayalam month Thula (mid-October).

You will start witnessing the effects of Saturn Transit 2 months before the actual transit happens. Lord Ayyappa, born out of the spiritual union of Lord Vishnu and Shiva, has unique powers to control the bad effects of Saturn.