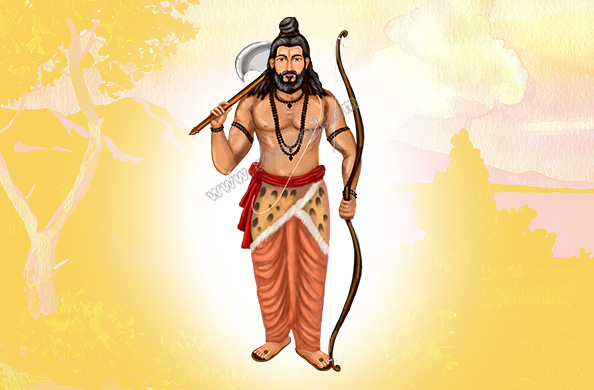 Parashuram refers to the Parashurama Avatar of Lord Vishnu, the God of protection and sustenance. The Sanskrit word ‘Parashu’ means an axe or a battle axe, and the ‘Ram’ who was wielding this weapon, came to be known as Parashuram, the Ram with the axe. Lord Parashuram is an extremely aggressive manifestation, taken for annihilating evil en masse, for the sake of the common good of the world.

Parashuram, the sixth incarnation of Lord Vishnu is generally depicted as a sage adorned in saintly clothes and holds an axe in one hand and a bow on the other with arrows on hung on his shoulder.

As the protector of the worlds, Lord Vishnu himself takes incarnations on earth whenever the need arises, to uproot evil, restore Dharma (righteousness) and to establish justice. Lord Parashuram is one such sacred incarnation of the Lord and is regarded as the 6th of his 10 famous incarnations. He is said to have appeared during the epoch, Treta Yuga. Parashuram was a mighty and ruthless warrior who appeared in a belligerent form for punishing the atrocious Kshatriya rulers and ridding the earth of their wrongdoings.

Bhagavata Purana narrates the fearful story of Parashuram in excellent detail. Parashuram was born as the youngest son of the great sage Jamadagni. Though born a Brahmin, he was physically strong, mentally tough and very aggressive by nature, and was raring to fight injustice, wherever he found. Once, when Parashuram was away from the hermitage, the mighty king Kartavirya Arjuna happened to come there with his people and sage Jamadagni took care of all of them with good food and other courtesies, with the help of the wish-fulfilling divine cow Kamadhenu. The arrogant king, wanting to possess this Godly creature, dragged away the cow and her calf forcefully, when he left. Later, coming to know of the injustice committed, Parashuram marched with his axe to the capital of the king, fought with all his army who attacked him, finally killed the mighty Kartavirya Arjuna himself and brought back the cow and calf. Then, as atonement for killing the king, when Ram started on a pilgrimage, the sons of the slain king ravaged the hermitage and brutally slaughtered the sage.

Learning about what happened to his father; Parashuram flew into a rage and put to death, the perpetrators of the crime. It is also said that as his mother beat her chest 21 times over the corpse of his father, Parashuram continued with his vicious assault and destroyed 21 generations of tyrannous and brutal Kshatriya kings, who inflicted untold hardships on people. Parashuram did resort to violence, but not as an act of revenge. He took to aggression and annihilation, only to crush the growing despotism, oppression and cruelty that were let loose by the ruling class against the weak and the ordinary people. It was thus an attempt to put an end to evil so that the world can witness peace and tranquility.

Parashuram also appeared very briefly in Ramayana, where he had an encounter with Lord Rama, and overcame by him, surrendered the essence of his spiritual powers to him and proceeded to the mountains for doing penance. Epic Mahabharata also refers to Parashuram as the preceptor of great heroes like Bhishma, Drona and Karna. Parashuram remains as one of the Chiranjeevis, the immortal ones, who live forever and is credited as the valiant warrior, who retrieved the land of Kerala from the seas and founded the martial art of Kalaripayattu.

People offer regular worship to Lord Vishnu and his incarnations like Parashuram at homes and in temples, praying for their welfare. People observe the day of his advent with piety as Parashuram Jayanthi, during the waxing Moon phase of Shukla Paksha in the month of Vaishaka (April–May) when Tritiya Tithi prevails during the time of Pradosham, and pray to him for bestowing them with courage and the will to fight injustice.

The day of the advent of Lord Parashuram is celebrated with piety as Parashuram Jayanthi. It falls during Shukla Paksha, the waxing phase of the Moon in the month of Vaishaka (April–May), when Tritiya Tithi (3rd lunar phase) prevails during Pradosha Kaal, the twilight hours. People observe austerities and offer worship to him on the occasion, seeking the blessings of courage and the will to fight injustice.