This famous Murugan temple is located around 40 kilometers from Chennai city, on the Chennai-Kolkata highway. Located near Ponneri, the place is now called Chinnambedu. Originally it was called Siruvar Por Pori (Siruvar –children, Por Pori – waging war). The temple deity here is Murugan, who is called Sri Balasubramanyar.

Murugan is one of the most popular and loved among the Hindu Gods. He is the God of War and is mostly worshipped across South India. He is primarily worshipped among the Tamil community in Tamil Nadu and across Sri Lanka, Malaysia, Singapore, and other parts of the world. There are references to Murugan in the ancient Vedic texts. In Tamil literature, Murugan is referred to as Murukan, the Youth. His name finds reference in the Shaiva Puranas, most importantly in the Skanda Purana. His name finds a lot of mention in Tamil Sangam literature, and all his six abodes are spread across Tamil Nadu. 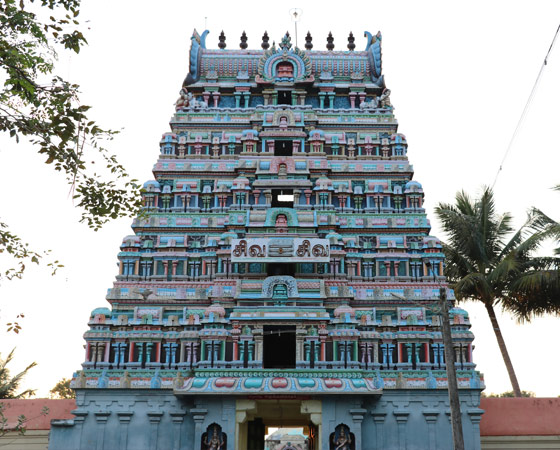 Legend has it that the sons of Shri Rama and Devi Sita, Luv and Kush lived here. Shri Rama passed the place, and the children fought a war against him, not knowing he was their father. As the children waged war here, the site came to be called Siruvar Por Pori (meaning children waging war). Now the place has been renamed Chinnambedu, which was initially known as Siruvar Ambu Edu (children taking up their arrows for a fight).

Another story goes back a hundred years. In the village, there lived a lady called Murugammai. She was an ardent devotee of Murugan and always chanted his name and prayed to him. Her husband was angered by her devotion to Murugan, and he asked her to stop worshipping Murugan. However, Murugammai did not heed his words, and in a rage, he cut off her arms. Murugammai, faced with this terrible predicament, called out to Murugan for help. Pleased with her dedication and fervor, Murugan appeared and rectified her hands without any signs of the wounds.

The main deity at the Siruvapuri Balamurugan temple is Sri Balasubramanyar. The temple also has the deities of Sri Annamalaiyar (Shiva) and Sri Unnamulai Amman. In this temple, the Utsava Moorthy of Murugan can be viewed in a wedding posture as Valli Manalar, with Sri Valli. Murugan is one God with several names, but this particular name, Valli Kanavan, stands out. Murugan married Deivanai, the daughter of the celestial God Indra. But he also married a huntress from the human world called Valli.

The image of Murugan in wedlock with Valli is called Valli Kalyana Sundarar. This form is depicted in the Kumara Tantra as Murugan having one face and four hands. While the front two hands are in Abhaya Mudra and another placed on the hip, the hands behind are holding the Rudraksha Mala and the Kamandalam. Murugan is holding the hand of Valli ahead of wedlock. This idol is only one of a kind and can be seen at the Siruvapuri Sri Balamurugan Temple.

There is a unique feature in the temple. The Vaahan (vehicle) of Murugan is a Maragatha Mayil (peacock), which is made of green stone. The other deities in the temple include Maragatha Vinayaka, Aadi Murugar, Venkatrayar, Naagar, Muniswaraar, and Bairavar.

The temple also houses a statue of the famous Tamil saint-poet Arunagirinathar that views the temple sanctum. This saint has visited the temple several times and sung the Thiruppughazh songs, praising Murugan.

Significance of the Siruvapuri Balamurugan Temple

To the right of the main deity of Sri Subramanyar is the sanctum of Annamalaiyar and Unnamulai Ambal. Murugan and his spouse Valli stand between them, hand in hand. This image is a very rare feature.

It is also said that when Murugan married Valli, a huntress in human form, this aspect had in-depth logic as God showed that all are equal in his eyes. The Vallinayakam form expresses precisely this philosophy. Valli shines as the Ichha Shakti. Murugan and Valli are depicted as a blissful couple, and Murugan always wears a smile beside her.

Devotees worship the Valli Kalyana Sundarar and seek blessings for marriages within the family to be conducted at the proper time. Worshipping the deity on the day of Thai Poosam Nakshatram (star), helps people get married quickly. This is because the wedding of Valli and Murugan took place on the day of Poosam Nakshatram (star). Marriages that have been delayed for particular reasons or circumstances get relief and the blessings of Sri Subramanyar pave the way for happy marriages.

How to Reach Siruvapuri Balamurugan Temple

The nearest airport is at Chennai, 52 kilometers away.

The nearest railway station is at Ponneri, which is 14 kilometers away.

There are direct buses available from CMBT to the temple. From Chinnambedu bus station, the temple lies at a distance of 1.6 kilometers.