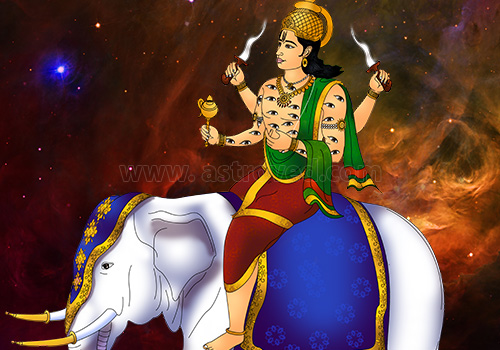 Indra Dev or Indra is a Vedic God of firmament and is the king of Swarga (heaven) and the Devas (the heavenly beings). He is considered the God of the life-sustaining rain, thunder, lightning, storms, and rivers.

Indra is depicted as a strong man and riding his celebrated white elephant, Airavata. He wields the mighty Vajrayutha, the lightning thunderbolt as his weapon. Vajrayutha is a unique and unusual weapon, made out of the diamond-like bones of sage Dadhichi. The white horse Uchchaihshravas, which originated during the churning of milky ocean is also considered his mount.

During the Vedic times, Indra remained perhaps the most powerful of Gods, referred to the most in Rig Veda, the earliest of Vedas. In the past, the society remained largely agriculture-based, and hence, being the God of the rains, the Lord of the heaven was worshipped by our ancestors. Thus, he remained a very powerful God during the Vedic period, and immediately after that too, not only in Hinduism but also in Buddhism and Jainism.

Indra is a colorful God, who is portrayed as a divinity, possessing both virtues and vices. There are numerous legends associated with him, of which a few are quite interesting.

Once, Lord Indra Dev was riding on his elephant mount in all his majesty. Durvasa, the mighty sage known for his short temper, came to him and gave him a sacred garland, which he himself had received from Goddess Mahalakshmi. In his vanity, Indra accepted the garland casually in his left hand and placed it carelessly on the elephant’s head. The animal pulled the precious gift in its trunk, threw it on the ground and stamped it by its foot. The sage was enraged at this severe disrespect shown to the Goddess and himself, and cursed Indra and the Devas, because of which they lost their power, wealth and glory. As a result, the Devas were thoroughly defeated by the Asuras (demons) and were sent into hiding. It was then left to Lord Vishnu , the God of protection to intervene on behalf of Indra and the Devas, arrange for the churning of the ocean of milk and get for the Devas, Amrut, the nectar of immortality, by consuming which Indra and others regained their strength and their heavenly kingdom, by overcoming the demons.

According to another story, Indra was defeated and driven out by a demon called Vritra, who received a boon that he cannot be killed by any conventional weapon. The Asura also took away all the water, and thus tried to starve the world to extinction. Vishnu advised Indra to fight the demon with Vajrayudha. Acceding to Indra’s pleadings, the sage agreed for the supreme sacrifice for the sake of saving the world and gave up his body, from which Indra pulled out the backbone and designed his Vajrayutha, the thunderbolt. He fought and killed Vritrasura using his Vajrayutha, released the water and got back his kingdom.

On another occasion, Mahabali, the mighty Asura king began doing a big penance, which made him all-powerful, thus posing a threat to Indra. Lord Vishnu , once again came to Indra’s rescue, took the form of a dwarf, went to Mahabali, made the demon promise him land, measurable by three steps of his tiny foot, then grew into a gigantic form, measured the entire universe with his two steps, pushed Mahabali down in the third and restricted his influence to the netherworld. The grace of Lord Vishnu thus cemented Indra's power and authority.

There are also stories about Indra’s notorious, amorous nature and lust. As per one of them, Indra was enamored by Ahalya, the beautiful wife of sage Gautama, went to her in the form of her husband, misled and seduced her. When things came to light, he was cursed by the sage, the effects of which, he is believed to be still suffering.

Indra was widely worshipped in South India, where a big festival called Indra Vizha was celebrated in his honor. However later, his importance seems to have declined, as he became some sort of a lesser God and his worship more or less ceased. However, he very much continues to remain as one of the divinities in the Hindu pantheon.

Indra is portrayed as a divinity, possessing both virtues and vices. He is considered the God of the life-sustaining rain, also of thunder, lightning, storms, and rivers.