Nithya Kalyana Perumal Temple is dedicated to Lord Vishnu, which is located almost 40 kilometers away from Chennai in a place called Thiruvidanthai. It is one among the 108 Dhivya Desams of Lord Vishnu and is highly revered in “Nalayira Divya Prapandam”, a sacred text of Vaishnavites. Many Alwars and saints have praised this temple. Many devotees who wish to have a good life partner would pray to this temple to get a good life partner. It is believed that Goddess Varahi, the third incarnation of Lord Vishnu had married 360 daughters of Sage Kalava on 260 days. Hence this temple is worshipped as a temple dedicated to people looking for a life partner. It is believed that this temple is self-manifested By Lord Varaha and Komalavalli. It has been declared as a monument by the Archaeological Survey of India. 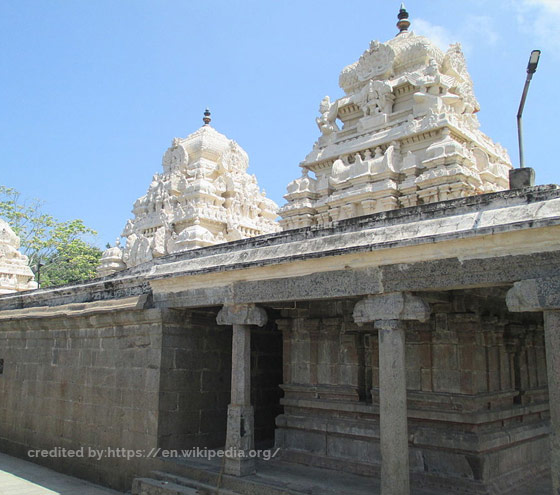 The temple was built during the reign of Pallavas, where other prominent shrines built by them were Mamallapuram and Thiruvidanthai. This temple dates back to the first century, and there are several inscriptions on the temple, where several facts about the temple are understood. It is believed that many kings were interested in this temple, and gifted many things. King Rashtrakuta gifted a lamp, and several inscriptions say that Chola kings were instrumental in building the temple and working for the enhancement of this temple.

It was believed that the gatekeepers of Lord Vishnu were cursed, and was born as demons called Hiranyaksha and Hiranyakashipu to Sage Kashyapa and his wife Diti. They amassed a lot of powers and became invincible. They also got a boon that nothing could kill them but forgot to include “Wild Bore” in the list. They captured the Earth, who was personified as Bhumadevi and hid her beneath the world. Lord Vishnu, took in the form of Varaha and saved her. He became very fond of her and married her. Later, Sage Kalava got his 360 daughters married to Lord Varaha. Thus this temple is dedicated to Lord Varaha, where his celestial weddings are highly revered.

This temple was built by Pallavas, which is more than 2000 years before. It is a beautiful temple on the shores of the Bay of Bengal. There is a beautiful pillared hall in the temple, where there are intricate carvings on the pillar. The entire structure is built in Granite stones, and are filled with a lot of inscriptions, which helps the people to know more about history. There is a temple tank, which is very sacred, and all the water required for the rituals are drawn from here. There are several shrines for Lord Ranganatha and his consort Goddess Ranganayagi,

This temple invites a lot of people across the globe to partake in the temple’s celebrations. Among the festivals , Brahmmotsavam ,  Navratri, Vaikunta Ekadasi which is celebrated during the months of December and January are highly important. Other important festivals like Deepavali , Rama Navami, Krishna Jayanthi are also celebrated here with a lot of pomp and glory.

This temple is dedicated to people who are looking for a life partner. People would come to this temple, and make special Puja. Once their prayers boon has been granted, where they found a partner and got married, they would come back to the temple, and submit their prayers to the Lord. There is a special pond in the temple, where people would draw water, and believe to have mystical powers. Couples who are looking for progeny would also be benefited significantly.

It is located on the ECR road and is connected well across various other towns.