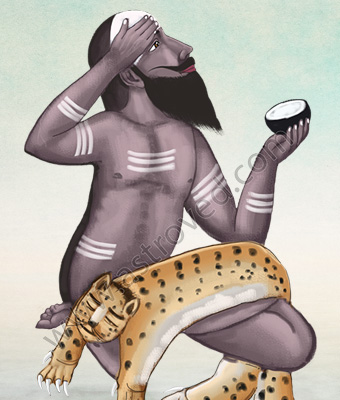 Sage kashyapa has a significant position in Indian heritage and is one of the Saptarishis, along with the other

sages like are Vashishta, Atri, Gautama, Vishwamitra, Bhardwaj, and Jamadagni. The word “kashyapa” means turtle in Sanskrit. His contribution is highly significant in the development of this world. He is a great scholar and has composed several books patronizing Ayurveda. He has mastered the field of pediatrics, gynecology, and obstetrics.

He has a significant position in the evolution of species, where he is called “father of all species”, where all beings, then bifurcated into individual species, carrying a significant character, and specific feature on their own. The valley of Kashmir is named after Sage kashyapa. Before that, the land was only covered with water. Due to the sacred penance, and his mystical power, he converted the total land into a land of prosperity and divine vibrations.

Sage Kashyapa was born to Sage Marichi and Kala. His mother Kala was the daughter of Saint Kardam and the sister of Kapil Deva. He has composed several books Kashyapa Samhita, or Jivakiya Tantra or Braddha Jivakiya Tantra, which are highly renowned in the field of Ayurveda. Saint Kashyap’s hermitage was situated at the top of Meru hill, which is highly sacred. Hindu Pantheon gives a great reverence for Meru hill and is considered highly mystical. It is believed that his mystical powers are the result of his severe austerities towards Lord Brahma.

It is also believed that Daksha Prajapathi was born to Lord Brahma, and married Aksini, and had 66 daughters. Saint Kashyap married 13 of his daughters, and along with the daughters of Daksha Prajapathi, he also married several other wives.

As regarded as the father of all species, he is the forefather of all Jaities(species). Even before the life of Sage kashyapa, human beings had all qualities of Devas, Nagas, Yakshas, and Gandharva. It was only Sage kashyapa, who bifurcated based on their appearance, mental abilities, qualities, and other diversities. He had several wives, and their offsprings are considered to be different species. It is believed that Garuda, the animal mount of Lord Vishnu and Aruna are the sons of Sage Kashapa from his wife Vinata. The Nagas (serpents) are his sons from his wife Kadru. The Danavas came from his wife Danu. Sage kashyapa and his wife Aditi, gave birth to Agni, the Adityas. With his wife Diti, he brought the clan of Daityas.

The legends and his contributions can never be abridged. He has been listed among the powerful sages in Brihadaranyaka Upanishad, one of the ancient texts which lists the sages of India. Not only in Hinduism, but he has also been referred in Buddhism too, when Lord Buddha referred to powerful saints, he mentioned the name of Sage kashyapa.