Marundeeswarar Temple, in Tiruvanmiyur, near Chennai is the house of Lord Shiva in the form of Marundeeswar or Aushadeeswarar, the God of Medicines. Marundeeswarar Temple is visited by people who want to cure and good health. This temple was revered and worshipped by Nayanmars or the divine Tamil Saints, Tirugnana Sambandar, and Appar. The mixture of sacred ash, water, and milk, is which is believed to cure any ailments, and is distributed as Prasadam to the public. This temple is having enormous curing power and said to curb all the ailments of his devotees. The temple enjoys a festive aura throughout the year, inviting many pilgrims and devotees from various parts of the world. 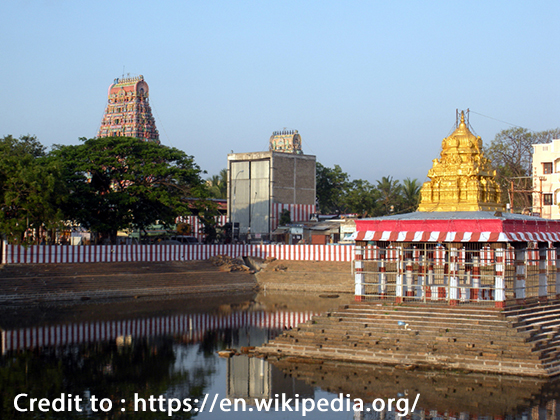 This temple has vast legends and great history associated with it, and one among them was that Lord Shiva himself had taught Great Saint Agaistiyar about medicines and other cures. The main deity is Shivalinga, which is said to be self-manifested. Marundeeswarar temple is a place known for bestowing blessings for people suffering from diseases and ailments. Lord cures them abundantly by his divine powers and ensures that his devotees are free from worries. He had imparted all his knowledge on the properties of herbs and plants, to Sage Agastya in this shrine to enrich the sage with knowledge and enlightenment for the sake of humanity. He has been bestowed with the name Marundeeswarar, where Marundhu in Tamil means medicine, denoting Lord Shiva as God of Medicines.

It is also said that Sage Valmiki, who wrote The Ramayana, visited this shrine to worship Lord Shiva, and to correct his past deeds. It is believed that the Sage was once a thief and later became acetic through his severe penance. He was blessed abundantly for his notable work in this shrine. After this incident, this place came to be known as Thiruvalmikiyur, which gradually changed to Thiruvanmiyur. There is also a place in Thiruvanmiyur called Valmiki Nagar, to honor Sage Valmiki and to commemorate his worship towards the Lord.

This temple is built in Dravidian architecture. The temple was expanded by the Chola Kingdom in the 11th century. The temple has two entrances, one from the West Tank Street and the other one on the East Coast Road. The temple has a 5-tiered Tower or Raja Gopuram, and the temple complex is built in one acre. The Vimana, the tower above the sanctum Sanctorum, of the presiding deity is built-in “Chaturvastam design. The temple has various images that embellish the pillars, stucco images on the walls, and the tower. The hall or the Mandapam housing Lord Somaskanda, an incarnation of Lord Shiva is built with 36 pillars and is beautifully carved.

This temple also has smaller Shrines for Lord Ganesha and Murugan. Thirumurai mandapam is present inside the temple complex, where Thirumurai denotes the divine couplet written on Lord Shiva, to praise his glory. The three forms of Lord Shiva have been installed in this temple namely, Thyagaraja, Marundeeswarar, and Nataraja. Thyagaraja and Nataraja form Shiva are not represented in a Lingam form. There is a separate shrine for Goddess Thirupurasundari, who is the incarnation of Goddess Parvati, and the consort of Lord Marundeeswarar.

The temple hosts many festivals around the year. The important festivals are Shivratri, Skanda Sashti, and Ganesha Chaturthi. Panguni Brahmmotsavam is celebrated in March- April. Shivratri is celebrated in the month of February-March. Vinayaka Chaturthi and Skanda Sashti in October-November.The full moon days or the Kruthika Star Days are also widely celebrated. Other regular poojas of this temple are Sankatahara Chaturthi and Prathosham. Visiting during these celebrations will fill your life with happiness and glory.

Lord Shiva is the God of good health here. It is believed that he cures the ailments of the people and gives them a better life. People across the globe visit this temple and get abundant blessings. The peace and tranquility of this temple are widely said to have healing properties.

How to reach Marundeeswarar Temple

Chennai Airport is the closest airport to the shrine. This is both Nationally and internationally connected.

Tiruvanmiyur MRTS is the nearest railway station, which is very close to the shrine.

Thiruvanmiyur bus stand is the nearest one to this shrine. Other modes of transport such as autos and cabs are available in plenty.