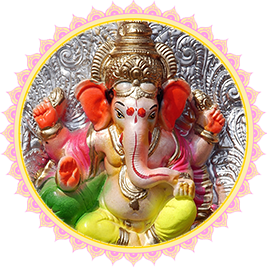 Lord Ganesha is the favorite God of millions of people. You can find Ganesha’s temple anywhere and everywhere in India. He resides on the banks of the rivers, under the trees and on the streets. Ganesha temples are not only found in India but all over the world. He is the protector and obstacle remover.

Ganesha Chaturthi (Chaturthi - the fourth day of the lunar fortnight in the Hindu calendar), also known as Vinayaka Chaturthi, is celebrated throughout India, to mark the birthday of Lord Ganesha. The occasion falls on the 4th lunar day of Shukla Paksha (waxing Moon phase) in the month of Bhadrapada (August–September), also known as Avani month (mid August – mid September). It is a 10-day festival and on the 10th day, the idols are carried in a procession with joyful music and chants, and dissolved in a nearby water body.

Lord Ganesha is known by many names including Vigneshwara, Vinayaka and so on, and is in different forms. Some of his more popular ones are:

Lord Ganesha is symbolized with an elephant head, potbelly, and mouse as his vehicle. The elephant head denotes divine wisdom; the potbelly represents abundance and mouse means swiftness. He is also called as “Vinayaka” which means “destroyer of hurdles.” You must worship Lord Ganesha before beginning any work/business, to remove all hurdles and blocks that you may confront. By worshipping Lord Ganesha and observing vrat (fast) on this occasion, you would be bestowed with abundant wealth and prosperity. The ceremony is also considered auspicious to start any new business or venture.

Sankatahara Chaturthi – is one of the most important days dedicated to the worship of Lord Ganesha. ‘Sankatahara’ means ‘the one who removes obstacles and sorrows.’ Worshipping Lord Ganesha on the 4th waning Moon every month, can destroy all the hurdles in your path and bless you with health, wealth and a successful life. On this day, Lord Ganesha would be in red color with four arms, clad in blue, seated on a Lotus Peetam with his consort to his left. TheSankatahara Chaturthi, which falls before Ganesha Chaturthi, is considered more auspicious to worship Ganesha and is called as ‘Maha Sankatahara Chaturthi’.

He is the God of good fortune and the remover of problems and obstacles. He is also regarded as the God of wisdom, health, wealth, fertility, celibacy and happiness. In the Panchayatana Pooja (worship of 5 primary deities), Ganesha is glorified as one of the five prime deities (Brahma, Vishnu, Shiva, Shakti, and Ganesha) whose worship can confer liberation. Before you start any work, you must pray to Ganesha. He commands the first place in everything. Even when you go to a temple, people offer prayers to Ganesha first and then move to the other sanctums. 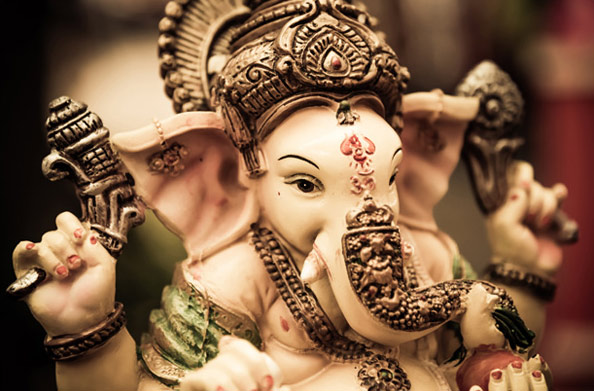 Many legends describe the circumstances of the birth of Ganesha. The Shiva Purana says that once, Goddess Parvati decided to have a bath and wanted a guard to prevent intruders. She fashioned a child using turmeric powder, gave life to him and instructed him not to permit anyone to enter her private chambers. Later, when Lord Shiva came to meet Parvati, the child denied him entry, without knowing that the Lord was her husband. This annoyed the Lord and a fight broke out between the child and Lord Shiva. In the end, the ever-powerful Lord Shiva On returning from her bath, Parvathi found her guard dead and headless. When Lord Shiva knew the truth, he ordered the guard’s body to be given the head of an elephant. The child was then restored to life and was called Lord Ganesha. His birthday is celebrated as Ganesha Chaturthi.

In one of the Puranic tales, the Devas approached Shiva asking for help, as they were under attack by demons. Shiva graciously consented to aid them, and from his mind emerged the glowing figure of a child with the head of a mighty elephant. On seeing this beautiful child, Goddess Parvati placed him on her lap and decreed that no endeavor, whether by mortal or God, would be successful if prayers were not offered to the child. Shiva made the elephant-child, the lord of his Ganas.

Even the Gods and Goddesses worshipped Lord Ganesha before starting on any mission. As per myth, it is believed that any activity performed after praying to Ganesha shall bring positive results. Once, Lord Shiva waged a war against a demon, who had been a scourge to Gods and Devas alike, without getting the permission of Ganesha, taking his son for granted. This enraged Ganesha. Furious, he caused the axis of the chariot in which his father was traveling to break. Shiva apologized to his son. Finally, after offering his respects to his own son, Shiva could carry out his mission.

Ganesha idols made with clay are purchased and kept in the sacred altar at home. The idol is consecrated, Poojas are performed along with mantra chanting and finally Prasad (food offering) is distributed. In temples, the ceremony is celebrated for ten days and includes chanting of Vedic Hymns and Ganapati (Ganesha) Upanishad. The Lord is worshipped by offering sweets such as Modak - a delicious dumpling made of rice flour, jaggery (cane sugar) and dry fruits - which is believed to be Ganesha’s favorite. After the daily prayer, they are distributed as Prasad to the community. On the tenth day, the idols are worshipped with a grand Pooja and are carried as a public procession for dissolving in a river or an ocean. It is believed that he reaches Lord Shiva and Goddess Parvati in Mount Kailash.

It is believed that coconuts have the special ability to absorb Karma, and hence, smashing coconuts for Lord Ganesha on his birthday can dissipate all the negative energy holding back your success.

Worshipping Lord Ganesha on his birthday -Ganesha Chaturthi - can bestow the following benefits: