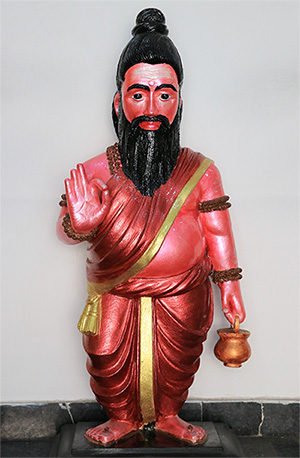 Sage Agastya or Agastya Muni is one of the renowned saints of India, where he is highly revered by the “Siddha Cult” of Tamilnadu. Siddhars are people with mystical powers but are different from saints or hermits. They amass great powers through meditation and have various powers called “Ashtamaha siddhi”, or eight powers.

Sage Agastya has contributed to Alchemy, Palmistry, Astrology , and literature. It is also believed that he was specially assigned by Lord Shiva to go to Southern India, and patronize literature. He is a great Yogi himself, where he has initiated Kriya Yoga and has many disciples under him. With his special powers, he has healed a lot of people and helped them to get cured physically and mentally.

Father of Sage Agastya was Sage Pulasthya. He belongs to the order of Saptha rishi. His mother was Celestal mainden Urvashi, who is bestowed with the power of levitation. It is important to note that Sapta Rishis, are revered saints, born to Lord Brahma. They are bestowed with a special responsibility of establishing culture, humanity, for the benefit of mankind. They are also the repository of powers, knowledge, and wisdom. Sage Pulasthya, is saint of high reverence and great benevolence. He used his skills to heal the sick and deprived people. He had the great power of floating in the sky and helped those who meditated or requested him for help.

Sage Agastya is also called “Kuda Muni”, as he was born in a pot. He is also called Kulla muni, as he was of short strature. Birth of Sage Agastya is connected with another legend, where it is believed that he was born inside a pot, where Lord Varuna , the Sea God, and Lord Mitr deposited their sperms. It was during a sacred ritual, and the pot was submitted inside the holy pyre.

He has composed several books in Tamil and patronized the Tamil language. He has participated in “Madurai Sangam”, a special conglomeration for Tamil poets, and writers. He is a great yogi and has mastered Kriya Yoga, where he amassed great powers. He was the Guru of Maha Avatar Babaji and initiated Kriya Yoga. His disciples like Rama Devar, Tholkappiyar and Sundaranandar are also equally revered.

He is considered as a great link to Shaivism and Vaisnavism. His devotion to Goddess Shakti was highly commendable. He belonged to the lineage of Tripura Acharyas. He was able to invoke Goddess Tripura Sundari's blessings and got magnificent Yantra. It is highly specialized, whee it curbed his sins and was raised to the highest level of sadhana.

Many saints, when they are bestowed with significant powers, they amass with the universe and become one with the cosmos. Sage Agastya’s immortal body is kept in Sree Padmanabhaswamy Temple in Thiruvananthapuram, Kerala, where Agastya Jayanthi is one of the important festivals for many people across the South India. Many people feel special power, and great mystical force, when they are at Padmanabaswamy temple.

Even now across many temples, there are several statues of him, where he is worshipped, with prayers, abhisheka or the hydrating ceremony, and reciting of various sacred texts. Many people even believe that he is in the “Sukshama Roopa”, the invisible form, and continuously bless the people, and be the guarding angel for several souls. They also believe that he is still wandering across various temples, and other mystical hills, where he often comes and meditates. His powers are still unfathomable and would be revered for several centuries to come.