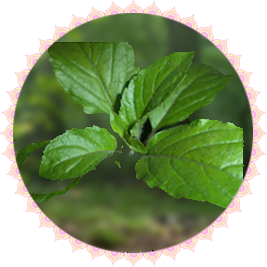 What is Tulsi Vivah?

The Tulsi or basil plant is accorded the status of a divine Goddess and worshiped with great devotion in most of the houses. The plant is considered extremely holy and carries great religious and spiritual significance. Tulsi Vivah is a marriage ritual which is conducted between Goddess Tulsi and Lord Krishna, which is performed during Prabodhini Ekadashi (the 11th lunar day in the bright fortnight of the Hindu month of Kartik or November - December) and Kartik Poornima (full moon in Kartik month). This auspicious ceremony is performed during one of the days which fall between the eleventh day of the ‘Shukla Paksha’ or waxing phase of the moon to the Poornima (full moon day) in the Hindu month of ‘Kartik’. This corresponds to the months of October – November according to the English calendar. This auspicious ceremony also indicates the end of the rainy season and heralds the start of the wedding season in India. 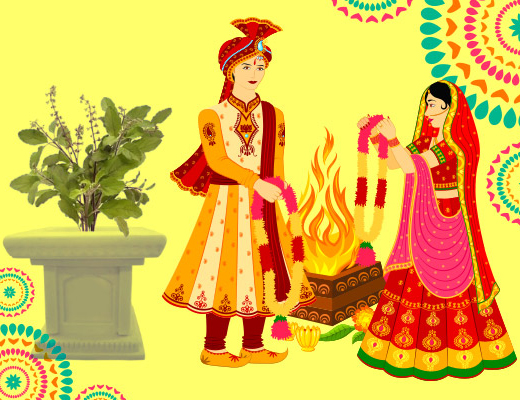 In keeping with the status of a Goddess, the Tulsi plant is widely referred to as ‘Vishnupriya’ or the beloved of Lord Vishnu. The significance of the Tulsi Vivah ceremony is elaborated in the ‘Padma Purana’, a sacred Hindu scripture.

The text narrates the legend of the Tulsi plant in detail. Apparently, the Tulsi plant was a woman named ‘Vrinda’, who was a great devotee of Lord Vishnu. However, she was married to a demon king named ‘Jalandhar’. Due to her devotion to the Lord, Jalandhar had become virtually invincible and harassed the Devas and other living beings. The infuriated Devas were unable to overcome this mighty demon and finally approached Lord Vishnu to help them resolve their predicament.

The devotion of Vrinda rendered even Lord Vishnu helpless, but he soon devised a way to trick her. He assumed the form of Jalandhar and violated her chastity. Jalandhar thus lost his status of invincibility and soon succumbed to the might of Lord Shiva. Vrinda was devastated by this turn of events and released her pent-up rage on Lord Vishnu. Her devotion forced Lord Vishnu to assume the form of a black stone called ‘Saaligram’. She also declared that Vishnu would be separated from his wife Goddess Lakshmi in a future incarnation. This prophecy was subsequently fulfilled when Vishnu was born as Lord Rama, the prince of Ayodhya. In this avatar, he was indeed separated from his beloved wife Sita, when she was abducted by Ravana, the king of Lanka.

Meanwhile, Vrinda decided to immolate herself in her husband’s funeral pyre. She was however saved by the grace of Lord Vishnu, who blessed her and transformed her into a Tulsi plant. To atone for his sin, Vishnu also married her, and this ceremony was held on the auspicious occasion of Prabodhini Ekadashi.

The Tulsi Vivah ceremony can be performed in a temple or at home. It is customary to observe a ‘Vrat’ (fast) on the day of Tulsi Vivah. The marriage ceremony is enacted in the evening. A colorful stage is erected and the Tulsi plant is placed reverentially on the platform. The brick masonry structure in which the Tulsi plant is grown is called ‘Tulsi Vrindavan’. It can be found in almost every Hindu household.

The traditional belief is that Devi Vrinda’s soul inhabits the Tulsi plant after dusk and resides there till the morning. The plant is decked up with a sari and an assortment of ornaments, which can include several necklaces and earrings. A drawing of a human face is made on paper and attached to the plant, and is decorated with a ‘bindi’ and nose-ring.

The sacred ‘Saaligram’ stone represents Lord Vishnu as the groom. Sometimes a brass image of Vishnu is also used. This image is then decked up in a ‘dhoti’, characteristic of the Hindu male wedding dress. The marriage ceremony begins after Tulsi and Vishnu are bathed and colorfully decked up with various flowers.

The ritualistic marriage is performed to the chanting of ‘Mangal Ashtaka’ mantras. The ceremony is rendered complete after the mantras are recited. Rice mixed with vermilion is then showered on the divine couple by all those present. This is then followed by clapping to indicate the approval of the wedding.

Tulsi is then offered a ‘Mangal’- Sutra’, to indicate her status as a bride. Vishnu is offered sandalwood paste which is smeared on his forehead. After completion of the rituals, sugarcane, fruits, coconut chips, and groundnuts are distributed as ‘Prasad’ among all those present. Devotees also prepare special food dishes and sweets to celebrate the occasion.

Lord Vishnu is the preserver and protector of the universe and one among the Trinity. Performing a sacred homa to Lord Vishnu can bestow...