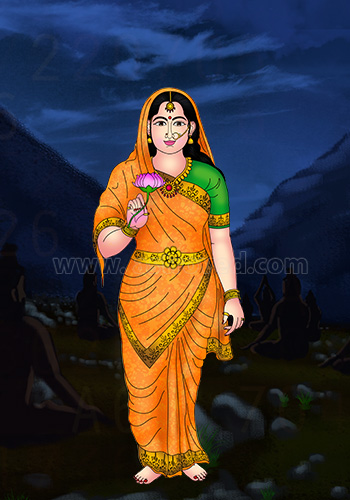 Goddess Sita , is the central female character of the Hindu epic Ramayana and daughter of King Janaka of Videha. She is an avatar of Lakshmi, Goddess of wealth and wife of Vishnu. Sita is the consort of Lord Rama (avatar of Vishnu) and is revered as a paragon of spousal and feminine virtues for all Hindu women. She is renowned for her dedication, self-sacrifice, courage and purity.

Goddess Sita embodies all the values that people believe a woman must have in her character and is depicted as a woman of virtue and patience whose devotees equate with intelligence, growth, and increase in prosperity. Attributed as a synonym of fertility and purity, Sita comes across as the ideal daughter, wife and mother. She is revered for her virtues and attributes and symbolizes all that is noble in womanhood.

Sita is regarded as the incarnation of Goddess Lakshmi and followed her husband Lord Rama to Earth as his consort. Lord Rama, an incarnation of Vishnu, descended from Vaikunth to restore peace and harmony on Earth. She is considered as the Earth Goddess who blesses the land with good crops and regarded as a daughter of Bhūmi Devi. Sita is also said to be blessed and reborn as the epic heroine Draupadi, Goddess Padmavati and is also mentioned as Vedavati.

After marriage, Goddess Sita goes to exile with her husband, Rama and brother-in-law Lakshmana to settle in the Dandaka forest, from where she is abducted by Ravana, Rakshasa King of Lanka. She is imprisoned in the Ashoka Vatika Garden, until she is rescued by Rama, who slays her captor. After the war, Rama asks Sita to undergo Agni Pariksha (an ordeal of fire) by which she proves her purity before she is accepted by Rama. After proving her purity, Rama and Sita return to Ayodhya, where they are crowned as King and Queen. 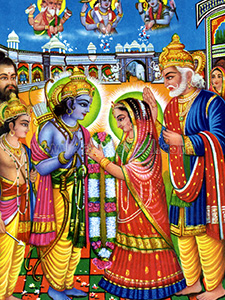 After a few months, Sita becomes pregnant whereupon Rama sends Sita away on exile and banishes her from the kingdom. She takes refuge in Sage Valmiki’s Ashram where she is blessed with twin boys Luv and Kusha. Years later, Sita returns to her mother, the Earth's womb as a testimony of her purity after she reunites her two sons with their father Rama.

To celebrate the birth of Goddess Sita, devotees place symbols of a plough and Goddess Earth in front of the idols of Ram, Sita, King Janak and Mata Sunayana. Sita Navami puja is then performed using rice, til and barley as offerings.

Sita Navami is celebrated with fervour and gaiety all over India and people seek blessings from Maa Sita for happiness and long life of their spouse. Worshipping Lord Rama and Sita together brings peace, harmony and happiness in marriage. Many women also observe fast with purity, devotion and faith which denote qualities like sacrifice, modesty, motherhood and dedication in the person.