Lord Rama is revered for his compassion, valor, and devotion to religious values and duty, He is venerated as the seventh avatar of Lord Vishnu who descended to Earth in human form to restore righteousness and dharma. He is the central figure in the epic Ramayana and the embodiment of virtue and selflessness. He is considered a Maryada Purushottama or the upholder of Dharma and hailed as an exemplary human who excelled in self-control withstanding all the vagaries of life. Lord Rama exemplifies all the virtues of an ideal son, an upright husband, a righteous King, and a loving brother and even an ideal man with traits worthy of being emulated by all.

Lord Rama is depicted with a dark complexion wielding a bow and arrow, with Sita and Lakshman by his side, and Hanuman prostrating before him. Sage Valmiki’s Ramcharitmanas extolls His virtues and speaks of the greatness of his Godly attributes. Lord Rama will be forever venerated in Hinduism as the epitome of a selfless and ideal human being.

Lord Rama is hailed as the seventh incarnation of the preserver of the Universe, Vishnu Himself and one of the Dashavatars. Vishnu descended to Earth as Lord Rama when the world was rife with evil forces and demonic forces were terrorizing the inhabitants of Earth. Thus, Vishnu assumed human form and vanquished the evil restoring righteousness and dharma.

Lord Rama is the son of King Dasaratha, a prince of the Solar race and Queen Kausalya. Born at the end of the Second Age or Treta-yuga, He descended into the world at the bidding of the Gods to vanquish the fearsome multi-headed demon Ravana, the King of Lanka. The Divine drama is enacted and eventually culminates in the demise of the king of Lanka. 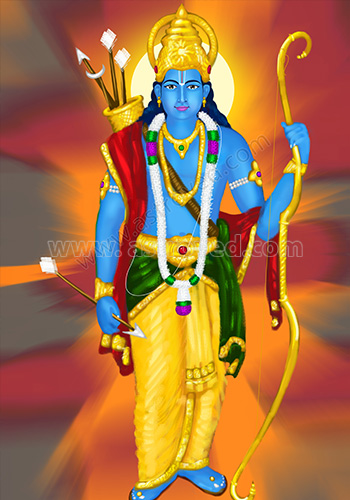 This event is widely celebrated as “Dussehra” and His return to Ayodhya was welcomed joyously by the citizens who lit up the entire city with lamps and hence this day is celebrated as “Diwali” (The festival of lights) throughout the length and breadth of the country and many parts of the world. Lord Rama is considered by many Hindus as a historical figure who, along with his wife Sita are depicted in Hindu mythology as a picture of purity and marital devotion. The attributes of Rama illustrate his commitment towards fulfilling one’s pious duty of dharma.

On the occasion of Rama Navami, devotees offer flowers, Neer mor (butter milk) and vadai paruppu (made out of moong dhal). Specially prepared Naivedyam or Panagam made of jaggery, musk melon and ginger is considered to appease Lord Rama and invoke His blessings. Along with these offerings, payasam, panchamirtham and methi pulao are also offered. All these offerings bear significance to the hardships Lord Rama faced during his vanavasam or sojourn in the forest.

Worshipping Lord Rama is considered akin to worshipping the preserver of The Universe Lord Vishnu Himself. Devotees who emulate his good deeds benefit manifold from the benign Grace of the Lord and leading a life bereft of selfishness helps them attain a higher plane of dharma and righteousness.