The Veerabhadra Temple is in Anantapur District of Andhra Pradesh. The temple is an outstanding example of stunning Vijayanagar-style architecture. The temple has been built on the southern side of the town of Lepakshi, which is in the shape of a tortoise. It is known for its hanging pillars and cave chambers which are world-famous. The temple is dedicated to Lord Shiva who is worshipped as Lord Veerabhadra in this temple. There are several paintings and images which depict the scenes from the epics, Ramayana and Mahabharatha. 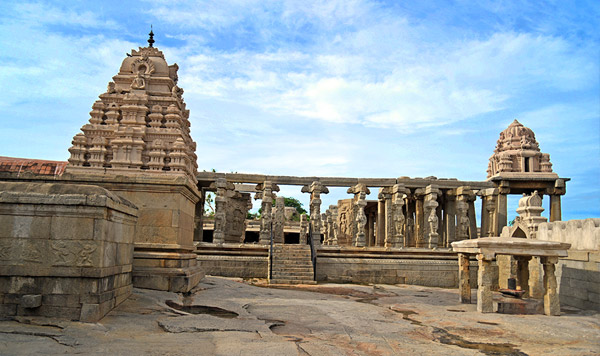 Veerabhadra Temple has a close association with Ramayana. Jatayu, a divine bird, wanted to rescue the abducted Goddess Seetha and was killed by the demon king, Ravana. Lord Rama instructed the bird to rise again by saying “Le Pakshi” in Telugu, thus the town got its name.

Another legend concerns two brothers, Virupanna, and Veerupanna. Virupanna's son was blind. One day, while playing near the Shiva Lingam, Virupanna's son gained his sight back. Veerupanna was a financier in Vijayanagar and was blamed for swindling money from the kingdom. He became highly disturbed by the false accusation, plucked out his eyes and threw them at the walls of the temple. Thus the town was called Lape-Akshi, which refers to the village of the blind. It is believed that the walls of the temple still have blood marks.

The stunning architecture speaks volumes of how the Vijayanagar kings generously patronized the arts, architecture and crafts. Lepakshi temple is divided into three sections - the ‘Mukha Mandapam’, the ‘Artha Mandapa’ and the ‘Kalyana Mandapa. The artistic carvings, the idols and the murals are breathtaking specimens of sculpture. There are several portrayals of ancient characters like Lord Ananthasayana, Lord Dattatreya, King Chaturmukha Brahma, Sage Narada and the celestial dancer, Rambha. There is a separate shrine for Lord Vishnu, and Goddess Lakshmi.

It is believed that in the Kalyana Mandapa the marriage of Lord Shiva and Goddess Parvati was held. The Natya Mandapa or the Dancing Hall and Ardha Mandapa or the worshipping hall have excellent carvings. Inside the sanctum sanctorum, the life size image of Lord Veerabhadra has been carved with ornaments of the skull and various other weapons. It is a life-size idol of great architectural excellence. It is believed that Sage Agastyar stayed in this temple and was instrumental in popularizing this temple.

Lord Shiva is a cosmic dancer and the greatest architect of the universe. He has immense power and is highly benevolent. By visiting this temple, one can be very sure that the cosmic powers residing here will heal whatever challenges they have in life. Their life will become pure and all the mist of past Karma will vanish.

How to reach Veerabhadra Temple

The nearest airport in Bangalore is almost 100 kms from the temple. Bangalore Airport is both a domestic and international airport. There are numerous modes of local transport from the airport to the temple.

The nearest railway station is Hindupur which is twelve kms away from the temple.

There are numerous modes of local transport. This town is well-connected by road, and the frequency of buses is high.