Introduction about the Srisailam Mallikarjuna Temple

The Sri Mallikarjuna Swamy Temple is a sacred Hindu shrine located in Srisailam in the Indian state of Andhra Pradesh. The temple is dedicated to Lord Shiva and his consort Goddess Parvati and the only temple in India significant to both Saivism and Shaktism. It is also considered one of the 12 Jyotirlingas of Lord Shiva and one of the 18 Shakti Peethas of the Goddess, Parvati. 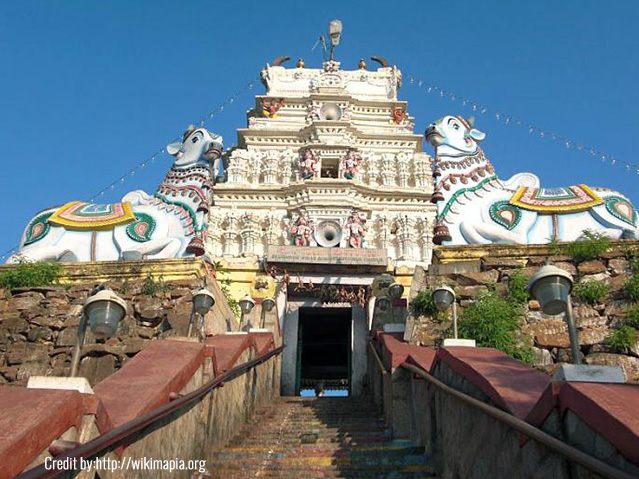 The essence of Shiva is present in the temple in the phallic form of the Lingam and he is worshipped here as Mallikarjuna, while his consort Parvati is revered here as Bhramaramba. This sacred shrine is a popular tourist and pilgrimage center which is visited by numerous people from all over the world, who come to offer prayers and also admire the magnificent architecture of the structure.

History of the Srisailam Mallikarjuna Temple

Several inscriptions found in the temple date back to the Satvahana Dynasty which indicate the temple could have originated during the 2nd century. Several further additions were also made during the reign of king Harihara of the Vijayanagara Empire.

In Vedic times Lord Shiva and his consort Parvati decided to find suitable brides for their two sons, Ganesha and Kartikeya . It was decided that whoever goes round the world in Pradakshinam would be the first to wed. Kartikeya set out on his sojourn across the world but meanwhile, Ganesha went round his parents seven times and according to the Shastras, going round one’s parents once is considered the equivalent of going round the world.

Lord Ganesha was married of to the twins Riddhi and Siddhi. But Lord Kartikeya was not too pleased when he returned and decided to retire to Mount Kravunja. He established his abode on the Mount and assumed the name of Kumarabrahmachari. Shiva and Parvati were full of remorse and followed him there. The place where they stayed came to be known as Srisailam. It was at this place that devotees started worshipping Shiva with jasmine flowers, which led to him being called as Mallikarjuna.

Mythical History of Mallikarjuna Temple as a Shakti Peetha

The Mallikarjuna temple is regarded as one of the 18 Shakti Peeths which tells the story of Sati, the consort of Shiva. Upon Sati’s immolation by fire, Shiva was distraught and commenced the Tandav dance. Lord Vishnu intervened on behalf of the Gods and severed Sati’s body into 18 pieces. The places where these pieces fell are revered as Shakti Peethas. The Mallikarjuna temple was established at the spot where Goddess Sati’s upper lip is believed to have fallen.

Significance of the Srisailam Mallikarjuna Temple

Apart from being one of the 12 Jyotirlingas and Shakti Peethas of India, the temple is also classified as one of the Paadal Petra Sthalam. The idol of Lord Mallikarjuna Swamy and Goddess Bhramaramba Devi are thought to be ‘Swayambhu’ or self-manifested, and the unique combination of Jyothirlingam and Mahasakthi in one complex is one-of-a-kind. The Lingam symbolizes the infinite nature of Lord Shiva , which has no beginning and no end. The Lingam in the shrine is also accessible to everyone and devotees are welcome to touch and perform Pujas by themselves.

This unique and extraordinary temple pays tribute to the interplay of both the masculine and feminine aspects of existence. It highlights the co-existence of both attributes as an equal and non-divisible factor. The essence of both Lord Shiva and Goddess Parvati together as one, lends credence to this theory.

Architecture of the Srisailam Mallikarjuna Temple

The temple is built in the South Indian style of architecture and faces the East. The shrine is a masterpiece of construction and renowned for its design and technique of construction. It is situated on the Nallamalai hills in Srisailam and renowned as one of the most ancient kshetras in India. It is currently maintained and administered by Chenchus with a Jangama priest.

The Mallikarjuna Swamy shrine in Srisailam celebrates several festivals with great pomp and fervor. Thousands of devotees converge on the temple during the festival season to take part in the proceedings and attain the blessings of the Divine couple. The main festivals celebrated here are Mahashivratri, Ganesh Chaturthi, Diwali, Dussehra, Pongal and Ekantha Seva. The entire complex comes alive during the festival days and the temple is packed with people who come for a glimpse of the deities.

Benefits or Blessings of the primary deity- Srisailam Mallikarjuna Temple

Visitors to this temple are awe-struck by the beauty and splendor of this magnificent temple. The presence of the Divine couple together makes it even more special. Devotees believe that those who are born in this holy place attain Mukti and are guaranteed a place in the Heavenly abode of the Gods.

Location – How to reach the Srisailam Mallikarjuna Temple

The Mallikarjuna Swamy Shrine is situated on the right side of the River Krishna in Kurnool District of Andhra Pradesh, and has been a highly popular Hindu pilgrimage center for centuries. It is easily accessible by various modes of transport:

By Air: The nearest Airport is located in Hyderabad, around 199 km away.

By Train: The Railway Station in Cumbum is around 59km away.

By Bus: Srisailam is well connected by bus service to neighboring cities and towns.